Sure! That is called ‘his-story’ (Henry Paulson’s fairy tale).

– Paulson Says He Was Prepared to Guarantee Lehman (BusinessWeek):

Jan. 29 (Bloomberg) — Former U.S. Treasury Secretary Henry Paulson says in his memoir that he was prepared to support a government backstop to prevent the bankruptcy of Lehman Brothers Holdings Inc. until he learned the firm’s assets were so mis- marked it would have guaranteed a loss to taxpayers.‘

As of  ‘now’ the US taxpayer has already lost everything, because of bailouts, stimulus packages, quantitative easing etc., which only benefited the banksters and the elite. It is just that the people don’t know it yet.

The US government and the Fed are bankrupting America!

If you are an investor and your investment starts to look really bad and is about to lose a lot of money, then you better sell it straightaway.

China is also about to lose a lot of money from holding US Treasuries, and it has now become very difficult to sell them without tremendous consequences, but the bailout/stimulus bubble will finally blow up. This will be the end of the dollar and the US as we know it.

Just think about the big dilemma the Chinese are in now, because of the irresponsible economic policies of the US.

I am not saying that China ‘always’ acted responsible. This is a created crisis. This is the Greatest Depression and it has only just begun. 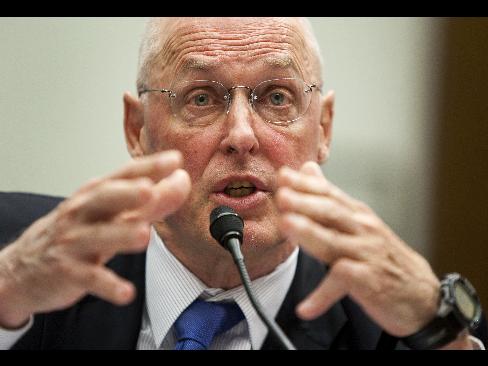 Paulson learned of the “disruptive scheme” while attending the Beijing Summer Olympics, according to his memoir, “On The Brink.”

The Russians made a “top-level approach” to the Chinese “that together they might sell big chunks of their GSE holdings to force the U.S. to use its emergency authorities to prop up these companies,” Paulson said, referring to the acronym for government sponsored entities. The Chinese declined, he said.

“The report was deeply troubling — heavy selling could create a sudden loss of confidence in the GSEs and shake the capital markets,” Paulson wrote. “I waited till I was back home and in a secure environment to inform the president.”

Russia never approached China about dumping U.S. bonds, Peskov said today. “This is not the case,” he said by phone.

Russia sold all of its Fannie and Freddie debt in 2008, after holding $65.6 billion of the notes at the start of that year, according to central bank data. Fannie and Freddie were seized by regulators on Sept. 6, 2008, amid the worst U.S. housing slump since the Great Depression.

Paulson said he was surprised not to have been asked about the Fannie and Freddie bonds during a trip to Moscow in June. “I was soon to learn, though, that the Russians had been doing a lot of thinking about our GSE securities,” he said of his meeting with Dmitry Medvedev, who succeeded Putin in the Kremlin the previous month.

Putin kept Paulson waiting before their meeting at the government’s headquarters and made the conversation “fun” by being “direct and a bit combative,” Paulson said. “He never took offense and we could spar back and forth,” he said.

Paulson’s book is scheduled to be released Feb. 1, though Bloomberg News bought a copy at a New York bookstore.