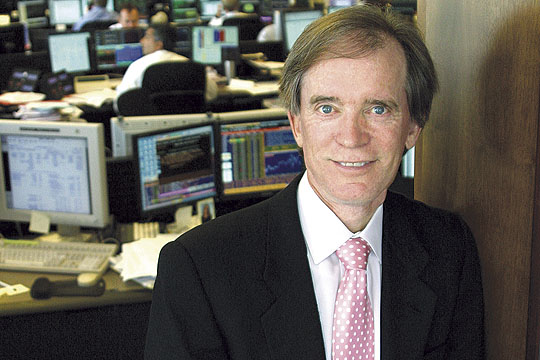 The government’s hopes of claiming credit for reviving the British economy suffered a severe blow today when the world’s biggest buyers of bonds warned that the UK was a “must to avoid” for his investors as its debt was “resting on a bed of nitroglycerine”.

The intervention by Bill Gross, co-founder of California-based fund managers Pimco, came on the day official figures confirmed that Britain had emerged from the deepest recession since the 1930s – but only by the narrowest of margins.

The economy grew by 0.1% in the final three months of last year, much weaker than even the most cautious expectations in Westminster and the City. The unexpectedly sluggish performance prompted Alastair Darling to warn that Britain could yet fall back into recession, telling the Guardian “there will be hiccups along the way”.

The chancellor insisted, however, that he would not be required to revise his forecast growth of 1-1.5% over 2010.”You cannot come through a recession of this magnitude, dust yourself down and walk off as if nothing happened,” he said. “Things will be steadily improving, but we have got to negotiate some bumps in the road.”

But the remarks by Gross, whose pronouncements on bond markets are regarded as highly influential, added to the sense that the economy remained in a dangerously parlous state. “The UK is a must to avoid. Its gilts are resting on a bed of nitroglycerine,” he said.”High debt with the potential to devalue its currency present high risks for bond investors.”

His views are particularly painful for the government as the head of Pimco’s European team is Andrew Balls, the brother of cabinet minister Ed Balls. Gross described the UK as posing risks for investors because it has “the highest debt levels and a finance-oriented economy – exposed like London to the cold dark winter nights of deleveraging”. He warned that the UK was in Pimco’s “ring of fire” where a country’s public debt could exceed 90% of GDP in a few years’ time. Darling’s current projections are for the debt to GDP ratio to peak at 77% in 2014.

Pimco has been trying to attract new clients by sounding the alarm about the UK for some time, most recently earlier this month when it unsettled markets by saying it was cutting back on its bond investments in the UK and the US.