(Financial Times) — The number of US workers making first-time claims for jobless benefits unexpectedly rose last week, as the government worked through a pre-holiday backlog of filings.

There is no recovery! 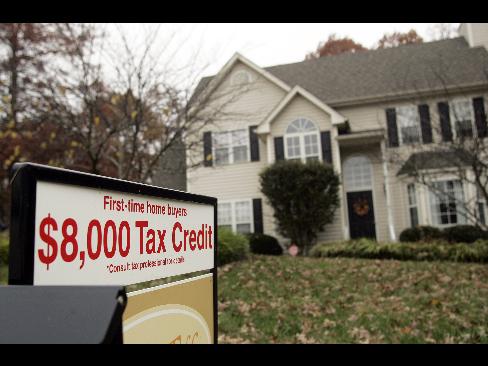 A sign publicizing a tax credit for first-time buyers stands outside a home for sale in Raleigh, North Carolina (Bloomberg)

Jan. 27 (Bloomberg) — Sales of new homes in the U.S. unexpectedly dropped in December, capping the worst year on record and signaling the government’s tax-credit extension has yet to shore up demand.

Purchases declined 7.6 percent to an annual pace of 342,000, marking the fourth decrease in the past five months, the Commerce Department said today in Washington. For all of 2009, sales declined 23 percent to 374,000, the lowest level since records began in 1963.

The falloff following the expected expiration of an $8,000 incentive for first-time buyers indicates the market remains dependent on government assistance. A setback in housing, combined with a jobless rate projected to average 10 percent this year and record foreclosures that will push up supply, may pressure home prices and builder profits for much of 2010.

“It’s going to be a long slog for housing,” said Joshua Shapiro, chief U.S. economist at Maria Fiorini Ramirez Inc., a New York forecasting firm. “We will see a decline in home prices and there is still a lot of shadow inventory out there that we need to get through.”

Economists anticipate Federal Reserve policy makers, meeting today to discuss the direction of interest rates, will stick to a pledge to phase out programs aimed at keeping mortgage rates low, bringing an end to another form of government help.

The end of the $1.25 trillion program of mortgage-debt purchases by the central bank on March 31 raises the risk that borrowing costs will jump. The plan helped send the rate on a 30-year fixed loan down to 4.71 percent in early December, the lowest level in Freddie Mac data going back to 1972.

The Fed “will probably stop the purchases and see how things go,” said Shapiro. “If rates shoot up, then they will probably be back in the game.”

The government tax credit to first-time buyers was originally due to expire on Nov. 30, which probably caused demand to swell in prior months, economists said. The Obama administration and Congress extended the credit to cover closings through June 30, and expanded it to include some current owners.

Bad weather may have also played a role in depressing December new-home sales, economists said. Last month was the 14th coldest December and 11th wettest in 115 years of record keeping, according to the National Climatic Data Center, in Asheville, North Carolina.

The median price of a new house decreased 3.6 percent from December 2008, to $221,300, today’s report from the Commerce Department showed.

At around 2:15 p.m., Fed Chairman Ben S. Bernanke and fellow central bankers may say they will keep the target rate for overnight bank lending near zero to help nurture the recovery. Bernanke is also battling to win support from senators considering his nomination to a second term as Fed leader.

Sales of existing homes plunged 17 percent in December, the month after the credit was to end. The decline was the biggest since records began in 1968, the National Association of Realtors said two days ago. For all of 2009, existing home sales rose 4.9 percent to 5.16 million, the first gain in four years.

New-home purchases, while accounting for less than 10 percent of the market, are considered a leading indicator because they are based on contract signings. Sales of previously owned homes, which make up the remainder, are compiled from closings and reflect contracts signed weeks or months earlier.

Rising foreclosures and joblessness near a 26-year high will weigh on any housing recovery. A record 3 million U.S. homes will be repossessed by lenders this year as unemployment and depressed home values leave borrowers unable to make mortgage payments or sell, according to a RealtyTrac Inc. forecast on Jan. 14. That compares with 2.82 million foreclosures last year.

Lennar Corp., the third-largest U.S. homebuilder by revenue, reported a 29 percent decline in revenue in the quarter ended Nov. 30 even as profits rose due a tax benefit and cost cuts, the company said Jan. 7.

To contact the report on this story: Bob Willis in Washington at bwillis@bloomberg.net