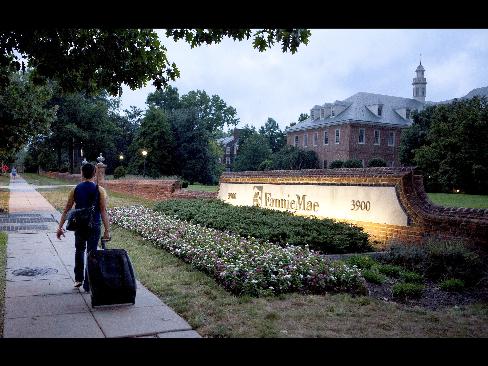 A pedestrian walks past Fannie Mae headquarters in Washington, D.C., on Sept. 7, 2009. (Bloomberg)

Dec. 31 (Bloomberg) — Taxpayer losses from supporting Fannie Mae and Freddie Mac will top $400 billion, according to Peter Wallison, a former general counsel at the Treasury who is now a fellow at the American Enterprise Institute.

“The situation is they are losing gobs of money, up to $400 billion in mortgages,” Wallison said in a Bloomberg Television interview. The Treasury Department recognized last week that losses will be more than $400 billion when it raised its limit on federal support for the two government-sponsored enterprises, he said.

The U.S. seized the two mortgage financiers in 2008 as the government struggled to prevent a meltdown of the financial system. The debt of Fannie Mae, Freddie Mac and the Federal Home Loan Banks grew an average of $184 billion annually from 1998 to 2008, helping fuel a bubble that drove home prices up by 107 percent between 2000 and mid-2006, according to the S&P/Case- Shiller home-price index.

The Treasury said on Dec. 24 it would provide an unlimited amount of assistance to the companies as needed for the next three years to alleviate market concern that the government lifeline for Fannie Mae and Freddie Mac, the largest source of money for U.S. home loans, could lapse or be exhausted.

Lax regulation of Fannie Mae and Freddie Mac led to the mortgage companies taking on too many risky loans, Wallison said.

“It turns out it was impossible to regulate them,” he said. “They were too powerful.” He said no one knows how much will be needed to keep the companies solvent.

From 1990 to 1999, Wallison served on the board of directors of MGIC Investment Corp., the largest U.S. mortgage insurer, including a stint on the audit committee, according to Bloomberg data and company filings.

“It was always safe to buy these notes,” he said. The U.S. government was always going to stand behind them. They’re as good as Treasury notes.” (Hilarious!!!)

To contact the reporter on this story: Matthew Leising in New York at mleising@bloomberg.net.