Moody’s has downgraded Greece’s credit rating, despite efforts by the new Socialist government to slash public spending and pull the country out of an economic crisis. 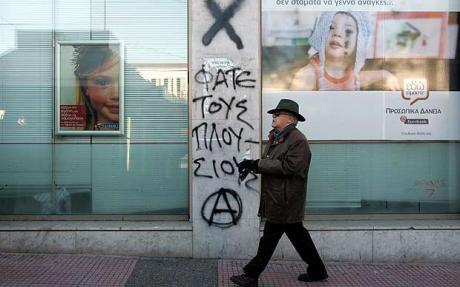 A man walks by a graffiti reading ‘eat the rich’, sprayed on the wall of a bank office in central Athens. Photo: EPA

The credit rating agency is the third to downgrade Greek government bonds – changing them from an A1 category to A2.

Standard and Poor’s and Fitch have also downgraded their assessment of the country’s ability to pay back debt.

Greece is facing its worst debt crisis in decades and has come under intense European Union pressure to improve public its finances and comply with deficit limits intended to support the shared euro currency.

The government announced a raft of measures this month to reduce Greece’s massive public debt, which has reached €300bn (£270bn).

It has promised to gradually bring the budget deficit – projected at 12.7pc of GDP for 2009 – to below the European Union’s eurozone requirement of 3pc of GDP by the end of 2013.

Government officials had indicated last week that a downgrade from Moody’s was likely.

However, the ratings agency said Greece did not face serious risk over its immediate borrowing ability.

“Greece’s repositioned rating of A2 balances the Greek government’s very limited short-term liquidity risks on the one hand, and its medium- to long-term solvency risks on the other,” Moody’s analyst Sarah Carlson, said in a statement.