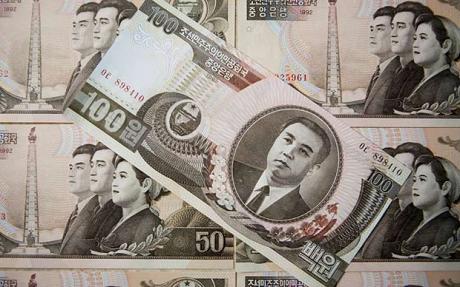 North Korean won plunges 96 percent against the US dollar

Dec. 9 (Bloomberg) — The North Korean won has plummeted 96 percent against the dollar after the government revalued the currency last week, according to reports by Yonhap News Agency and a South Korean aid group.

A North Korean bank in Sinuiju, near the border with China, offered to buy dollars for 35 won on Dec. 7, Good Friends, a Seoul-based rights group, said today on its Web site. Before the currency revaluation, the official rate was about 140 won, and as much as 3,500 won in the black market, Yonhap said.

North Korea’s regime ordered citizens to exchange 1,000-won notes for a new 10-won bill, the country’s first currency reform in 17 years, Yonhap reported on Dec. 1. The move has raised speculation that the government’s grip on power has been loosened by allowing limited free-market activities, such as trading food and goods.

“Once North Koreans realized that they could progress in society by their own economic effort, this created an alternative to advancing only politically through the ranks of state organizations,” Rudiger Frank, professor of East Asian economy and society at the University of Vienna, wrote on the Web site of the Nautilus Institute this month.

The government placed a cap on the amount of money people could exchange for the new notes, effectively wiping out savings.

Following the revaluation, rice prices have more than doubled, Good Friends said. One kilogram (2.2 pounds) of rice cost 50 won as of Dec. 5, compared with 16 won to 17 won on Dec. 2, the group, which obtains information through contacts within North Korea, said in its newsletter yesterday.

One in four school children were absent due to hunger on Dec. 3, indicating how widespread the struggle to find food had become, the group said, without saying how it derived the number.

To contact the reporter on this story: Bomi Lim in Seoul at blim30@bloomberg.net