Now that is an underground! 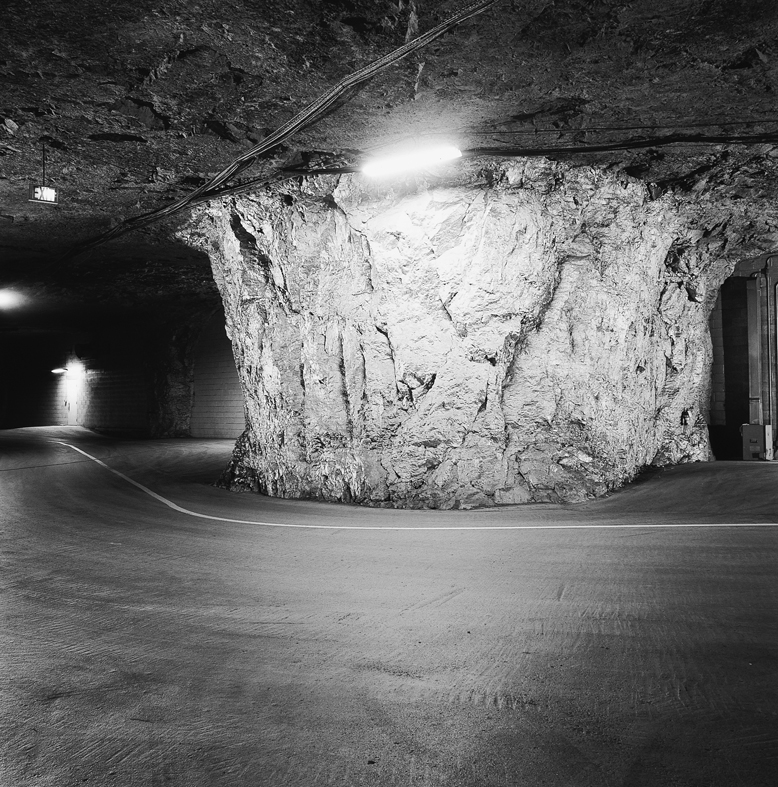 The mine shafts in Iron Mountain’s underground data center are supported with huge limestone columns. Most limestone mines excavate up to 85% of the mineral, but miners for U.S. Steel took away only 65% for added stability.

Click to view a slide show of The Underground

Computerworld – Down a road that winds through the rolling hills of western Pennsylvania, just across from a cow pasture, the bucolic scenery of Butler County is interrupted by a high chain-link fence topped with razor wire.

Cars entering the compound are channeled into gated lanes before being searched by a guard. A short distance beyond the security point, the road disappears into a gaping hole in a cliff face. The hole is sealed off by the thick, steel bars of a tall sliding gate controlled by guards carrying semiautomatic pistols. They are protecting a 25-foot-high passage that leads 22 stories down to Iron Mountain’s main archive facility, which takes up 145 acres of a 1,000-acre abandoned limestone mine.

Among dozens of red steel doors inserted in the rock face along corridors that create an elaborate subterranean honeycomb, you’ll find Room 48, an experiment in data center energy efficiency. Open for just six months, the room is used by Iron Mountain to discover the best way to use geothermal conditions and engineering designs to establish the perfect environment for electronic documents.

Room 48 is also being used to devise a geothermal-based environment that can be tapped to create efficient, low-cost data centers. (For information on more companies using geothermal conditions to improve data center efficiency, see “Riding the geothermal wave.”)

There is no raised floor in Room 48. Instead, networking wires are suspended above rows of server racks and cooled both by the limestone walls and vents attached to ceiling-mounted red spiral ducts 36 inches in diameter. The HVAC system uses the cool water of an underground lake hundreds of acres in size.

Outside light is beamed into the main aisle of the room through a long ceiling tube to reduce heat. Rows of server racks are encased in rectangular metal containers that trap electrical heat and force it up through perforated ceiling tiles, allowing the 55-degree limestone roof to absorb heat that otherwise would build up in the 4,100-square-foot room.

“Limestone can absorb 1.5 BTUs per square foot,” Charles Doughty, the vice president of engineering at Iron Mountain, said during a recent tour of the facility by Computerworld. Facts on molecular chemistry and mineral properties roll off 61-year-old Doughty’s tongue. He has worked as a technologist and archivist in the tunnels of the one-time mine for 37 years, studying thermodynamics in an ever-evolving effort to create the perfect environment for storing paper and electronic records.

Doughty’s underground office is adorned with dark wood furniture that’s upholstered in the type of rich leather befitting his executive status. The furniture and carpeted floors contrast sharply with a rough-hewn wall of prehistoric rock. The office sits just off a larger room filled with cubicles that also butt up against rock walls, which are painted white to better reflect light and suppress any limestone dust. 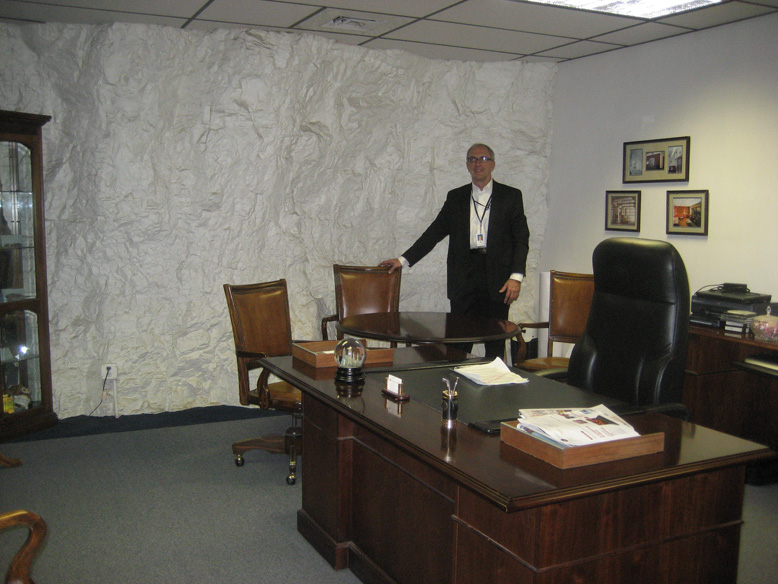 Charles Doughty, Iron Mountain’s vice president of engineering, in his underground office. Note the stark contrast between the executive surroundings and prehistoric rock.

The Underground, as the mine is called by employees, has its own cafe and a fire department with three engines. Like the other 2,700 workers here, Doughty traverses miles of roadways and tunnels in golf carts. Iron Mountain employs just 155 people in The Underground, the rest work for companies renting space in the facility.

An endurance kayaker who owns a working 30-acre farm and is training for an iron-man competition, Doughty is an idea man in a subterranean environment. He calls it “the best job in the world. I only get to create ideas. Other people do the work to make it happen. “

From mine to storage

Four hundred million years ago, a teeming ocean covered this area. And during a 100-million-year period, billions of tiny crustaceans died, their skeletons settling to the ocean floor, fossilizing and creating layer upon layer of limestone.

In 1902, U.S. Steel began blasting out that limestone for use in the production of metal for skyscrapers, railways and the rest of the nation’s booming infrastructure. By 1950, U.S. Steel ceased mining operations and began using the man-made caverns to protect its corporate records from the Cold War-era threat of atomic bombs. The company quickly saw a business opportunity in renting out mine space to other companies and to the U.S. government for vital-records archiving. Thus was born in 1954 the National Storage Company.

More than four decades later, in 1998, it was bought by Iron Mountain, which had itself started under similar circumstances in an iron ore mine in upstate New York. There, in 1951, Herman Knaust opened the Iron Mountain Atomic Storage Corp.

While the Iron Mountain facility in Pennsylvania may best be known as the home to the photographic collection of Bill Gates’ Corbis Corp. venture, it also houses the records of countless corporations and highly sensitive government agencies in its array of tunnels.

Doughty is focused on creating the most naturally efficient data center. One of his latest ideas is to drill a shaft from the hillside down to the mine’s lake and allow winter air to turn it into a slushy mix that can be used during summer months to dissipate heat in the mine’s data centers.

Unlike other limestone mines which are normally covered in layers of porous sandstone, The Underground was blessed with a roof of shale, which acts as natural umbrella. Water is absorbed into the ground around the mine, instead of through its ceiling. The subterranean lake is an anomaly created by groundwater that moves by osmosis into caverns at the low point of the mine where, at depths of four to eight feet, it spans hundreds of acres. For now, Iron Mountain uses the lake water in a motorized chiller tower from Krack Corp. to cool hot air coming from data center ducts. But Doughty believes the 50-degree water could eventually be circulated to the data center and back to the lake to naturally expel heat, eliminating the need for any HVAC system.”We’d like to get to the point where we expend no energy for cooling,” Doughty explained.

While there are four other data centers in the mine, the subterranean facility’s dehumidified air and cooler temperatures were initially only seen as advantageous to storing paper, photos, film and microfiche, which under the right conditions could last 2,000 years, according to Doughty. The mine’s natural environment wasn’t used to disperse heat and reduce energy consumption in data centers — until Room 48 opened.

Room 48 is starkly quiet compared to typical data centers. It creates its own wind through the use of alternating hot-air and cold-air server rack aisles. There’s no need for fans in the room, since the high static air pressure differential between the aisles separating rows of server racks naturally causes cold air to drop and hot air to rise through the perforated ceiling tiles and vents that run parallel along air ducts.

Iron Mountain also removed power distribution units and cooling transformers — common in other data centers — from inside the data center and located them outside to further reduce heat. That move also freed up about 30% more space, Doughty said.

By setting the room’s return air temperature to 75 degrees, Iron Mountain cut energy consumption for cooling by between 10% and 15% compared with the company’s traditional data centers. They operate between 70 and 72 degrees. The natural cooling also allowed Iron Mountain to boost power in the room to 200 watts per square foot, more than 50% above the 125 watts per square foot used in the other data centers located in the mine. Room 48 also cost about 30% less to build than they did because the design favored efficiency and cost reduction over specialty equipment.

For example, instead of buying expensive electrical equipment designed specifically for data centers, Iron Mountain went to the same electrical supply stores any electrician would frequent to purchase K-rated transformers or electrical load centers. “Anything you buy for a computer room is expensive,” Doughty said.

Iron Mountain also installed low-energy T8 fluorescent lamps enclosed in tubes to reduce convection, although most of the time the room is dark because lights are controlled by motion sensors in each aisle.

While the mine’s water isn’t yet being used to directly cool server racks, Doughty said that will be incorporated into future design changes. He’s convinced that all data centers will shift toward water-cooled racks. And he expects that geographical positioning using locations where natural cooling or energy resources can be exploited for efficiency will be the future of new data center construction.

Iron Mountain is just one of several such experimental efforts under way using geothermal conditions to power or improve the cooling efficiency of data centers. In February 2008, American College Testing (ACT) in Iowa City, Iowa was the first data center in the U.S. to be awarded the Platinum certification in the Leadership in Energy and Environmental Design (LEED) program, a voluntary rating system for energy efficient buildings overseen by the U.S. Green Building Council.

The ACT operation has a 4,000-square-foot raised-floor data center cooled by a geothermal “bore field.” The bore field consists of holes drilled into the earth and a closed-loop piping system filled with water or coolant that uses the cool underground conditions to exchange heat.ACT isn’t alone; other companies approved for Platinum status include Citigroup data center in Germany and Advanced Data Centers in Sacramento.Google is hot on the technology as well and has invested more than $10 million in three companies developing geothermal energy systems. The technology, called Enhanced Geothermal Systems, replicates naturally occurring pockets of subterranean steam and hot water by fracturing hot rock and using the resulting steam to produce electricity.

And in July, Microsoft opened a 700,000-square-foot data center in Northlake, Ill., that uses outside air as part of the cooling system.

Interest in geothermal technology isn’t surprising, said Doughty. “Energy costs are increasing exponentially so that the cost to operate the data center is becoming the greatest cost. People who can leverage the geographic location or a subterranean location will achieve the greatest benefit.”