Dec. 8 (Bloomberg) — Militants bombed a fifth Pakistani city in as many days, the latest attack in a nationwide surge in violence that has killed about 100 people, half of them in the country’s economic powerhouse region of Punjab.

A bomb near the spy agency’s office in the Punjab city of Multan killed 12 people. Earlier, Punjab Law Minister Rana Sanaullah said 40 people died and 100 were injured last night in bombings at a market in Lahore, the provincial capital. Pakistan’s key stock index fell 1.7 percent to its lowest in almost a month.

“The militants are going for civilian and security targets in a no-holds-barred manner and in a barbaric manner,” Mahmood Shah, a security analyst, said in a telephone interview from the northwestern city of Peshawar, where 10 people were killed in a bombing yesterday.

About 450 civilians and security officials have died in retaliatory bomb and gunfire attacks since Pakistan’s army began an offensive Oct. 17 against Taliban guerrillas in the tribal region of South Waziristan, near the border with Afghanistan. President Barack Obama has called Afghanistan and Pakistan the “epicenter of violent extremism practiced by al-Qaeda.”

Remember that there are only 100 Al-Qaeda fighters in Afghanistan according to the US government:

– UPDATE: $300 MILLION FOR EVERY AL QAEDA MEMBER IN AFGHANISTAN

President Barack Obama made the decision to send some 30,000 additional troops to Afghanistan despite being informed that the country is now host to only 100 Al Qaeda fighters, ABC News reports.

A senior U.S. intelligence official told ABCNews.com the approximate estimate of 100 al Qaeda members left in Afghanistan reflects the conclusion of American intelligence agencies and the Defense Department. The relatively small number was part of the intelligence passed on to the White House as President Obama conducted his deliberations. 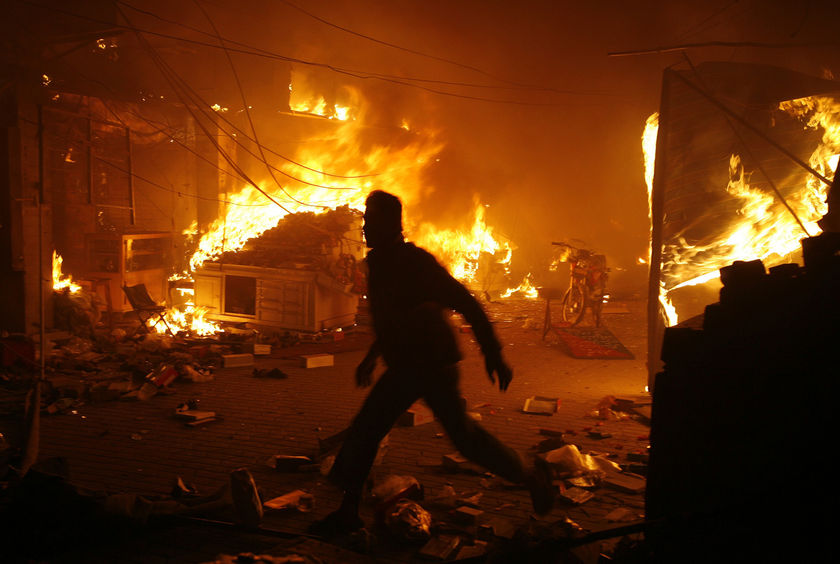 Attacks as night fell: The scene after the bomb blasts in the Lahore market (Reuters: Mohsin Raza)

Bomb blasts have torn through two of Pakistan’s main cities overnight, killing at least 43 people and wounding more than 100 as the nation struggles to quell a worsening Taliban insurgency.

Two blasts devastated a busy market and engulfed it in flames killing at least 33 people in Lahore, the capital of Punjab province, while in the north-west provincial capital of Peshawar a suicide bomber killed 10 people.

Attacks blamed on Islamist militants have surged this year as Pakistan presses military offensives against the Taliban across the north-west, under fierce US pressure to do more to destroy the extremists’ strongholds.

The popular Moon Market in the centre of eastern Lahore city was transformed into a scene of flames and rubble as night fell on Monday, when two bombs exploded 30 seconds apart outside a police station and a bank, officials said.

“Twenty-seven people are confirmed dead but the death toll may rise. A total of 137 people were injured,” he said.

“The blasts knocked out the electricity. Fire engulfed the whole of the market. We fear there are still dead bodies inside.”

Cultural hub Lahore is a city of nearly 8 million people and is increasingly in the Taliban’s cross-hairs, with five previous militant strikes this year killing more than 70 people.

The city of Peshawar in the north-west has borne the brunt of Taliban attacks avenging the operations against them, and was struck again around midday Monday when a suicide bomber in a rickshaw approached a district courthouse.

“He got down and tried to enter the building but could not do so because of our security arrangements,” said Bashir Bilor, a senior provincial minister.

The bomber then detonated about six kilograms of explosives, killing 10 people including a policeman and wounding 44 others, said Zafar Iqbal, a senior doctor at Peshawar’s main Lady Reading hospital.

Local television showed images of blackened sandals lying in pools of water on a charred road, as smoke and flames filled the streets.

“I was sitting outside the court when I heard a deafening blast,” lawyer Rashid Hussain told AFP.

“I rushed to the spot and saw dead and injured laying on the ground. It was really horrible, there were body parts and the injured were crying for help.”

There was no immediate claim of responsibility for either attack, but a fierce Islamist insurgency has killed more than 2,600 people in attacks mostly blamed on the Taliban in the last two-and-a-half years.

October and early November saw a fierce surge in attacks, including a huge suicide car bombing on October 28 that ripped through a Peshawar market killing 125 people in the worst attack in Pakistan in two years.

There had been a lull in attacks in recent weeks, then on Friday four suicide bombers stormed a mosque in Islamabad’s twin city Rawalpindi, killing 36 people in an onslaught of gunfire, grenades and explosions.

Pakistan’s military is engaged in offensives against Islamist fighters across much of the north-west including the tribal areas bordering Afghanistan, a region branded by Washington as the most dangerous place on Earth.

The tribal belt has been plagued by instability for years, exacerbated in 2001 when a US-led invasion ousted the Taliban regime from Afghanistan, sending hundreds of Taliban and Al Qaeda-linked militants into the lawless region.

Officials said Pakistani troops killed 10 suspected insurgents in operations in northwest Swat Valley and the tribal district of Bajaur on Monday, as the military pressed on with its attempts to dismantle Taliban strongholds.

Washington and London are however pressuring Pakistan to do more to capture Al Qaeda leader Osama bin Laden and prevent militants crossing the border and targeting foreign troops stationed in Afghanistan.