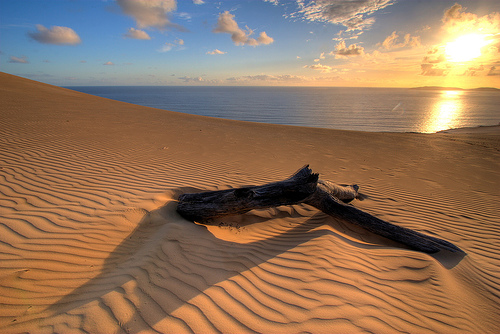 The future of Dubai.

Dubai World may be forced to sell overseas assets as part of its restructuring process, a top Dubai finance official conceded on Monday.

Abdulrahman al-Saleh, director-general of the department of finance, said that the holding company could sell some of its foreign investments and real estate holdings, which include the QE2 cruise liner and Cirque du Soleil, the Canadian circus operator.

“There is nothing to prevent [Dubai World] selling these assets,” Mr Saleh told Al Jazeera television.

Dec. 7 (Bloomberg) — Dubai shares tumbled to the lowest level in more than four months, led by Emaar Properties PJSC and Emirates NBD PJSC, on investor concern that a potential Dubai World default will hurt economic growth in the emirate.

Emaar, the United Arab Emirates’ biggest real-estate developer, slumped 10 percent, the most permitted by exchange rules. Union Properties PJSC closed at an eight-month low, while Emirates NBD retreated to the lowest since Sept. 14. The DFM General Index plunged 5.8 percent, the biggest fluctuation among global benchmarks tracked by Bloomberg, to 1,744.83, the lowest close since July 22.

Dubai World last week began talks with banks to restructure $26 billion of debt, including a $3.52 billion Islamic bond of property unit Nakheel PJSC, and said the remainder of its liabilities are on “a stable financial footing.” The emirate on Nov. 25 said it was seeking a “standstill” agreement on Dubai World’s debt, the holding company with $59 billion in liabilities. Dubai’s benchmark index has declined 17 percent since the announcement.

Dubai World may raise some of the money needed to repay debt by selling assets in and outside the U.A.E., Al Jazeera TV reported yesterday, citing Abdulrahman Al Saleh, director general of Dubai’s Department of Finance. The aim of Dubai World’s restructuring is to ensure it survives in the new environment, he said.

To contact the reporter on this story: Camilla Hall in Dubai at chall24@bloomberg.netClaudia Maedler at cmaedler@bloomberg.net

– The ruler of Dubai blasts global investors over debt crisis