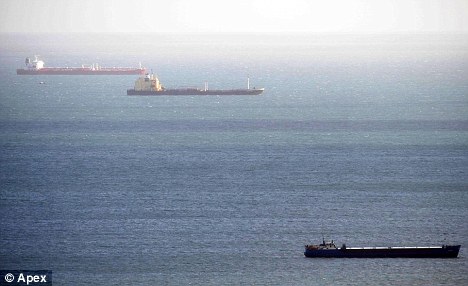 It looks foul, and leaves a brown haze across ports and shipping lanes. But what hasn’t been clear until now is that it is also a major killer, probably causing thousands of deaths in Britain alone.

As ships get bigger, the pollution is getting worse. The most staggering statistic of all is that just 16 of the world’s largest ships can produce as much lung-clogging sulphur pollution as all the world’s cars.

Because of their colossal engines, each as heavy as a small ship, these super-vessels use as much fuel as small power stations.

But, unlike power stations or cars, they can burn the cheapest, filthiest, high-sulphur fuel: the thick residues left behind in refineries after the lighter liquids have been taken. The stuff nobody on land is allowed to use.

Thanks to decisions taken in London by the body that polices world shipping, this pollution could kill as many as a million more people in the coming decade – even though a simple change in the rules could stop it.

There are now an estimated 100,000 ships on the seas, and the fleet is growing fast as goods are ferried in vast quantities from Asian industrial powerhouses to consumers in Europe and North America.

The recession has barely dented the trade. This Christmas, most of our presents will have come by super-ship from the Far East; ships such as the Emma Maersk and her seven sisters Evelyn, Eugen, Estelle, Ebba, Eleonora, Elly and Edith Maersk.

Each is a quarter of a mile long and can carry up to 14,000 full-size containers on their regular routes from China to Europe.

Emma – dubbed SS Santa by the media – brought Christmas presents to Europe in October and is now en route from Algeciras in Spain to Yantian in southern China, carrying containers full of our waste paper, plastic and electronics for recycling.

But it burns marine heavy fuel, or ‘bunker fuel’, which leaves behind a trail of potentially lethal chemicals: sulphur and smoke that have been linked to breathing problems, inflammation, cancer and heart disease.

James Corbett, of the University of Delaware, is an authority on ship emissions. He calculates a worldwide death toll of about 64,000 a year, of which 27,000 are in Europe. Britain is one of the worst-hit countries, with about 2,000 deaths from funnel fumes. Corbett predicts the global figure will rise to 87,000 deaths a year by 2012.

Part of the blame for this international scandal lies close to home.

In London, on the south bank of the Thames looking across at the Houses of Parliament, is the International Maritime Organisation, the UN body that polices the world’s shipping.

For decades, the IMO has rebuffed calls to clean up ship pollution. As a result, while it has long since been illegal to belch black, sulphur-laden smoke from power-station chimneys or lorry exhausts, shipping has kept its licence to pollute.

For 31 years, the IMO has operated a policy agreed by the 169 governments that make up the organisation which allows most ships to burn bunker fuel.

Christian Eyde Moller, boss of the DK shipping company in Rotterdam, recently described this as ‘just waste oil, basically what is left over after all the cleaner fuels have been extracted from crude oil. It’s tar, the same as asphalt. It’s the cheapest and dirtiest fuel in the world’.

Bunker fuel is also thick with sulphur. IMO rules allow ships to burn fuel containing up to 4.5 per cent sulphur. That is 4,500 times more than is allowed in car fuel in
the European Union. The sulphur comes out of ship funnels as tiny particles, and it is these that get deep into lungs.

Thanks to the IMO’s rules, the largest ships can each emit as much as 5,000 tons of sulphur in a year – the same as 50million typical cars, each emitting an average of 100 grams of sulphur a year.

With an estimated 800million cars driving around the planet, that means 16 super-ships can emit as much sulphur as the world fleet of cars.

year ago, the IMO belatedly decided to clean up its act. It said shipping fuel should not contain more than 3.5 per cent sulphur by 2012 and eventually must come down to 0.5 per cent. This lower figure could halve the deaths, says Corbett.

It should not be hard to do. There is no reason ship engines cannot run on clean fuel, like cars. But, away from a handful of low-sulphur zones, including the English Channel and North Sea, the IMO gave shipping lines a staggering 12 years to make the switch. And, even then, it will depend on a final ‘feasibility review’ in 2018.

In the meantime, according to Corbett’s figures, nearly one million more people will die.

Smoke and sulphur are not the only threats from ships’ funnels. Every year they are also belching out almost one billion tons of carbon dioxide. Ships are as big a contributor to global warming as aircraft – but have had much less attention from environmentalists.

Both international shipping and aviation are exempt from the Kyoto Protocol rules on cutting carbon emissions. But green pressure is having its effect on airlines. Ahead of next month’s Copenhagen climate talks, airlines have promised to cut emissions by 50 per cent by 2050.

But shipping companies are keeping their heads down. A meeting of the IMO in July threw out proposals from the British Chamber of Shipping, among others, to set up a
carbon-trading scheme to encourage emissions reductions.

Amazingly, they pleaded poverty. Two-thirds of the world’s ships are registered in developing countries such as Panama. These are just flags of convenience, to evade tougher rules on safety and pay for sailors.

But at the IMO, governments successfully argued that ships from developing countries should not have to cut carbon emissions. IMO secretary-general Efthimios Mitropoulos insisted: ‘We are heavily and consistently engaged in the fight to protect and preserve our environment.’ Yet without limits, carbon emissions from shipping could triple by 2050.

The failure brought calls for the IMO to be stripped of its powers to control the world’s ships. Colin Whybrow, of Greenwave, a British charity set up to campaign for cleaner shipping, says: ‘The IMO is drinking in the last-chance saloon.’

Burning low-sulphur fuel won’t cut carbon emissions from ships. But there are other ways. More efficient engines could reduce emissions by 30 per cent, according to British marine consultant Robin Meech.

Cutting speed could reduce emissions by as much again. And there are even wackier ways, such as putting up giant kites to harness the wind as in the days of sailing ships.

However you look at it, the super-ships are rogues on the high seas, operating under pollution standards long since banished on land; warming the planet and killing its inhabitants. Santa’s sleigh, they are not.

* Robert Pedersen, of Maersk, said: ‘The sulphur content varies according to where you get your fuel. Our average sulphur content is, I believe, 2.5 per cent. It’s rather rare you get anything close to 4.5 per cent.’ He added that ‘the sulphur issue is one for the whole industry’ and that there would be a ‘huge cost implication’ to switch to cleaner fuel.