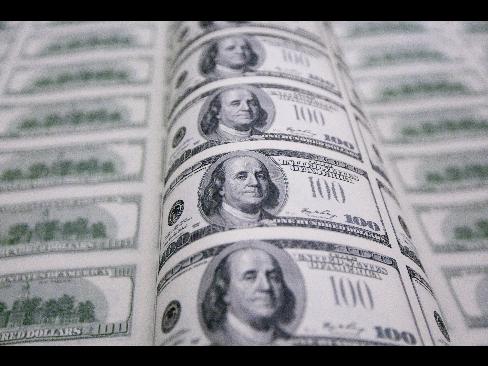 Nov. 23 (Bloomberg) — The most accurate dollar forecasters predict the world’s reserve currency will continue sliding even when the Federal Reserve begins to raise interest rates, which policy makers say is an “extended period” away.

Standard Chartered Plc, Aletti Gestielle SGR, HSBC Holdings Plc and Scotia Capital Inc. say the dollar will depreciate as much as 6.4 percent versus the euro. About $12 trillion of fiscal and monetary stimulus, the world’s lowest borrowing costs and a record $4 trillion of government bond sales between 2009 and 2010 will weigh on the currency, they said. So will the nation’s 10.2 percent unemployment rate and signs that the economic recovery (Which recovery?) may falter, they said.

“History tells us the dollar shouldn’t start rising on a sustained basis until 12 months after the Fed starts to lift rates,” said Callum Henderson, the Singapore-based global head of foreign-exchange strategy for Standard Chartered.

The best forecaster of the dollar against the euro in the six quarters ended June 30 in Bloomberg’s ranking of 46 firms last month predicts the greenback will weaken 5.3 percent to $1.58 per euro in 2010, from $1.4970 today.

“It’ll take time to drain the oversupply of dollars from the market,” Henderson said. “The dollar will remain weak until the Fed’s rates rise above the competitors’.”

The U.S. will be one of five economies represented in the Group of 10 to wait until after mid-2010 to raise benchmark rates, according to median predictions in Bloomberg surveys of as many as 60 economists. The Fed, the European Central Bank, the Bank of England and the Swiss National Bank will increase borrowing costs in the third quarter and the Bank of Japan will remain at 0.10 percent at least through March 2011, the surveys show.

By the end of 2010, only Japan will have lower borrowing costs, and those will be higher when adjusted for inflation, the forecasts show. The Fed’s target for overnight loans between banks will be 1 percent, compared with the ECB’s 1.5 percent benchmark.

U.S. borrowing costs will make dollar-based assets less attractive, said Camilla Sutton, the foreign-exchange strategy director at Scotia Capital in Toronto. The Bank of Nova Scotia unit, the most-accurate forecaster of the dollar versus the Swiss franc in Bloomberg’s rankings, predicts 2010 will end with the greenback weaker at $1.60 per euro.

“The dollar will lose the near-term race for interest rate increases and then lose the long-term race,” Sutton said.

Once the Fed raises its target, the dollar’s performance likely will mimic the pattern that followed the central bank’s past three rounds of increases, Sutton and Henderson said.

After policy makers started boosting borrowing costs in July 2004, the Dollar Index tumbled 10 percent and didn’t get back to where it had been before the first increase and stay there for more than a month until November 2005.

The top forecasters are in the minority, with median predictions in Bloomberg surveys of as many as 43 strategists showing the dollar gaining against the euro, pound, yen, Swiss franc and Swedish krona by Sept. 30. The other currency measured by the Dollar Index, Canada’s dollar, will outperform the greenback by 0.7 percent by the end of the third quarter, the projections show.

Twenty-four of 37 predictions for the end of next year have the U.S. dollar strengthening against the euro. The median is $1.46, up 2.5 percent. Twenty-seven of 31 strategists see the yen also getting beaten. The U.S. currency will gain 15 percent to 102 yen, from 88.85 today, the median shows.

“The dollar will gain support as soon as the Fed starts to rein in liquidity,” said Lee Hardman, an analyst in London at Bank of Tokyo-Mitsubishi UFJ Ltd., Japan’s biggest lender by market value. The dollar will strengthen 9.8 percent to $1.35 per euro by the end of 2010, the bank predicts.

The stock rally that pushed the MSCI World Index up almost 70 percent since March 9 will grind to a halt as the global recovery slows, spurring demand for the perceived safety of the dollar, according to Landesbank Baden-Wuerttemberg, which scored highest overall in Bloomberg’s rankings with a 5.6 margin of error for all currencies.

“Financial markets and equity markets have been too optimistic concerning economic growth next year,” said Gernot Griebling, the Stuttgart bank’s head of bond and economic research. “Risk aversion should rise again,” strengthening the U.S. currency to $1.37 per euro by Sept. 30, he said.

For now, the global recovery is on track, with the Paris- based Organization for Economic Cooperation and Development doubling its 2010 growth forecast for leading developed economies to 1.9 percent and predicting a 2.5 percent expansion for 2011. The recovery is fueling investments in higher-yielding currencies funded by selling dollars.

The Dollar Index has fallen 16 percent since March 5, a steeper drop than in any eight calendar months in 23 years. The decline began four days before the Standard & Poor’s 500 Index of stocks started its strongest rally since the 1930s, gaining 60 percent.

“If you look at the last two recessions, in each case the FOMC waited 2 1/2 to three years” after they ended to raise rates, Bullard said.

What happened after those moves convinces Standard Chartered’s Henderson and Scotia Capital’s Sutton that the dollar will keep sliding. HSBC, the top pound-dollar forecaster, and Aletti Gestielle, the best on the dollar versus the yen, also say the greenback will depreciate, to $1.50 and $1.60 per euro by mid-year, respectively.

The dollar will weaken “as investors worry about its status as a reserve currency and the public deficits,” said Sutton, a former Ontario Municipal Employees Retirement System money manager.

Central banks that disclose which currencies they hold put 63 percent of their new cash into euros and yen in April, May and June, the highest percentage for any quarter when global reserves grew more than $80 billion, Barclays Capital data show.

Henderson sees similarities to 2004, when the Fed had lowered its overnight target below the ECB’s.

The 2001 recession, induced by the crash of technology stocks, prompted the U.S. to cut rates by 5.5 percentage points to 1 percent in June 2003, a point below the euro region. The Fed stayed there until June 2004, more than two years after the recession ended. The dollar started rallying after the rate surpassed the ECB’s 2 percent that December.

The dollar didn’t start rallying after the Fed’s June 1999 increase until the ECB began raising its rates that November.

“When the Fed shifts from being dovish to the early stages of the tightening, the dollar continues to trade weak,” said Ray Farris, global head of foreign exchange research at Credit Suisse Group AG in London, the third-best euro-dollar forecaster. “It’s really only in the late stages of a Fed tightening when U.S. interest rates are high relative to everybody else that the dollar stabilizes and then recovers.”

The dollar plunged to a record low $1.6038 in July 2008 as seven Fed cuts opened up a 2.25 percentage gap to the ECB, making Europe’s securities more attractive. It rallied later in the year as the collapse of Lehman Brothers Holdings Inc. in September froze credit markets and sent investors to the safety of U.S. assets and the greenback.

“There’s nothing in the cards from a monetary policy angle that could persuade me from being a dollar bear in 2010,” said Jens Nordvig, a managing director and head of G-10 currency strategy at Nomura International Plc in New York, Japan’s largest brokerage firm, which bought Lehman Brothers’ European, Asian and Middle Eastern assets in 2008.

To contact the reporter on this story: Bo Nielsen in Copenhagen at bnielsen4@bloomberg.net.