The Goldman 10-Q is out, providing numerous interesting datapoints for those willing to scour through them. The key one: Goldman lost money on just one trading day in Q3, making money on all the other 64.

As a reminder, even in Q2 Goldman lost money on two trading days. The statistical probability distribution of 1 out of 65 is something that not the SEC, but Richard Feynman should be looking into, as Goldman Sachs, after rewriting the lass of risk/return, is now set to redefine normal distributions and other Statistics 101 concepts. 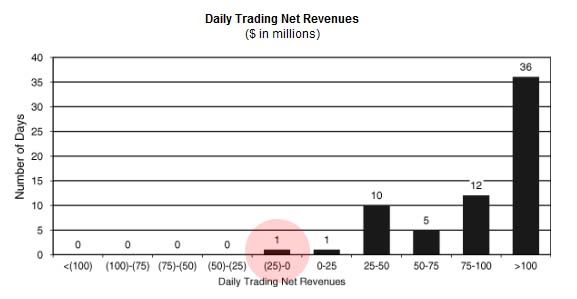 Looking at Goldman’s risk profile, total VaR presumably declined from $221 to $189: this was due to declines in Interest Rates and Equity Prices VaRs, coupled with an increase in Currency Rates and, more importantly, Commodity Prices. Notably, the “diversification effect” of numbing VaR provided about a ($93) benefit to reducing overall risk. One wonders what will happen to Goldman’s VaR when the dollar carry trade bandwagon hits a wall and death and destruction become pervasive. 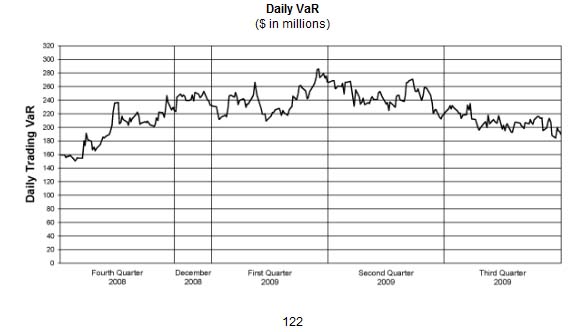 And an indication of just how much of a hedge fund Goldman has become instead of a client servicer, the firm’s Equities Commissions revenue for the quarter dropped to $930 million from $1.2 billion YoY, while prop Equities Trading skyrocketed from $354 million to $1.8 billion YoY! And just in case you were wondering someone, somewhere was motivated to destroy Fixed Income powerhouse Lehman and Bear, look no further than Goldman’s Fixed Income, Currency and Commodities which did a gentle jump from $1.6 billion in Q3 2008 to $6 billion last quarter. And that explains all you need to know about motivations and backstops.