Rotting carcasses testify to the scale of the disaster looming in East Africa. 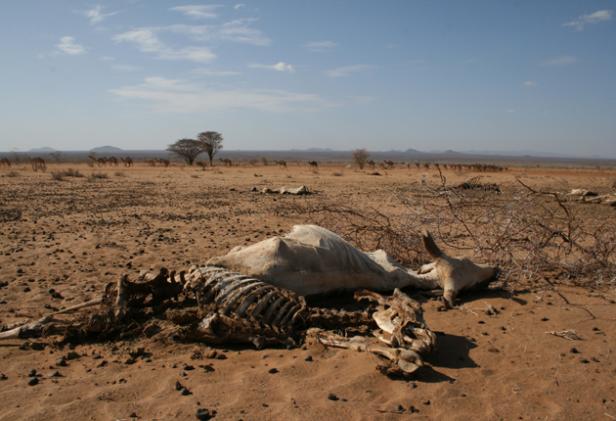 On the plains of Marsabit the heat is so intense the bush seems to shiver. The leafless scrub, bleached white by the sun, looks like a forest of fake Christmas trees. Carcasses of cattle and camels are strewn about the burnt red dirt in every direction. Siridwa Baseli walks out of the haze along a path of the dead and dying. He passes a skeletal cow that has given up and collapsed under a thorn tree. A nomad from the Rendille people, he is driving his herd in search of water.

He marks time in seasons but knows that it has not rained for three years: “Since it is not raining there is no pasture,” he says. Only 40 of his herd of sheep and goats that once numbered 200 have survived. Those that remain are dying at a rate of 10 every day.

Already a herder before Kenya’s independence he has never seen a drought like this.

“If I was young I would go to look for cash work. I am old. I may just die with my animals.”

Across East Africa an extraordinary drought is drying up rivers, and grasslands, scorching crops and threatening millions of people with starvation. In Kenya, the biggest and most robust economy in the region, the rivers that feed its great game reserves have run dry and since the country relies on hydropower, electricity is now rationed in the cities.

And yet, it is in the semi-desert on the southern fringe of the Sahel zone where the most dramatic changes are being felt. Droughts are nothing new here and the nomadic way of life where herders follow patchy rains across the seasons developed centuries ago as a response to precarious natural resources. The herds of cattle, sheep, goats and camels – which are venerated by the nomads – were built up in the good years to pad the margins of life when the rains failed. But this way of life is being overwhelmed, even the camels are dying of thirst.

Naibari Arara lives in a typical Rendille village, a broad circle of domed shelters ringed by a barricade of thorny branches or bomas. Inside there are corrals for the animals on whom life depends and huts fashioned from hides, rags and sticks, designed to be collapsed, packed and rebuilt in a single day.

But the village doesn’t move anymore. The animals are gone and so are the men. They left 12 months ago with the herds in search of pasture, she explains. In the meantime the women and children wait.

“We can’t leave from here. We can’t move without milk.” The Rendille have survived for generations on a diet of milk, blood and occasionally meat. Now they are living on food stamps and milk powder. “When I was a young girl we would move every two or three months but now there are no rains. I cannot explain this.”

An hour’s walk away in the town of Korre, Rendille elders have been discussing the crisis. Monte Wambile, reed thin with a weather-beaten face says that what’s unfolding is not a drought. According to folklore, a climatic disaster struck the same region about 120 years ago and is remembered in the local language as the “arbah”, or catastrophe. Starving families were forced to sell their children in return for cattle to survive.

Now, he says it has returned.

“Since I was a young man the droughts would come but these were just changes we could cope with. Now there are carcasses all over and most of the people have lost their animals. Soon the people will start dying.” Sariticho Lenelo is already dead. A 10-year-old Rendille boy in Loglogo, he was killed along with two young men when armed raiders attacked herders at the town’s water pump and stole nearly 300 livestock.

Across the north of Kenya competition for water, grazing land and surviving cattle has sparked ethnic conflict. Cattle raids were always a feature of nomadic cultures but as the battle for survival intensifies the death toll climbs. Sixty-five people have been killed in the Turkana region alone since January. Despite being a disaster three years in the making, the drought is in danger of catching Kenya and the UN unprepared. Failed harvests mean high food prices, the national government is crippled by infighting and corruption, and international aid groups have seen funding squeezed by the credit crunch. The food vouchers sustaining hundreds of Rendille families will run out in less than a fortnight as the Irish aid agency paying for them, Concern, has run out of money for the project. In the last week, other big organisations such as Oxfam and Cafod have launched emergency appeals. The UN has received less than half the £350m it has called for.

In reality no one can deliver the rain that is really needed. Leina Mpoke has been working to unravel the cycles of drought, local deforestation and global influences for the Kenya Climate Working Group. “The drastic changes we’re experiencing cannot be explained by local activities,” he says. “Across the southern Sahel we’re seeing a huge trend.”

In the 1970s there was a major drought once in the decade. In the 1980s this quickened to once every seven years, in the 1990s, once every five years. At the beginning of this decade the rains failed every other season and what we now see is “perennial drought”.

“What’s being seen,” says Mr Mpoke, who works with Concern, are “the consequences of global climate change”.

Marsabit mountain rises up from the semi-desert of northern Kenya to touch the clouds at nearly 2,000 metres. Its highland slopes have always offered respite from the heat and dust of the savannah.

The mountain was known as “Saku” or mist, and its elevated forest sheltered elephants, kudus, lions and high altitude lakes. It is now home to climate refugees who have swollen the population to more than 40,000. Ibrahim Adan grew up in Marsabit and is sad to see how it’s changed: “It used to be all green, now it’s horrible and dusty.”

“I remember as a child we had food we didn’t know what do with.”

He now runs a local organisation called Cifa that is working with struggling nomadic communities and distributes food stamps. He describes what’s happening as a “national crisis”.

“The climate has forced people to the mountain. The number of poor people is increasing every day. They are cutting down the forest for firewood, the environment is totally degraded.”

Everything in town is coated in a choking layer of red dust, the two mountain lakes have dried to a green-black crust and rangers at the Marsabit National Park say that eight elephants have starved to death in recent months. “If it wasn’t for climate change we wouldn’t have this concentration of people, it’s a vicious circle,” says Mr Adan.

Many of the climate refugees come to Petro Namweni Lojich when they arrive. He is the local chief of the Turkana, proud and warlike nomads whose homeland is more than 200km west of Marsabit.

Every time a vehicle arrives in town, he says, it brings another five or six Turkana.

“Drought and conflict are forcing them to come,” he explains.

These outlanders are shunned by many of the jostling communities in Marsabit and live on the margins. Their fate is a bleak harbinger for other nomads. Stripped of their livestock and “prestige” there is no way back for them.

The chief insists he is “still a Turkana” but admits that without a herd he would be treated as inferior even if he could go home. Without rain, he believes, the rest of the Turkana will be forced to do what he has done: “What is the alternative?” he shrugs.

Remembering the first time he stayed inside a building, he says: “I felt like my eyes had been closed. I couldn’t see the night sky.”

Looking older than his 44 years, he admits to not liking urban life. “When we lived outside we could see who was our enemy and see him coming. Here it is more complicated.”