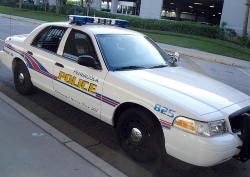 ‘Where are you at?’ officer allegedly asked as suspect lay under squad car

The police department in Pensacola, Florida, has suspended an officer who allegedly attempted to Taser a suspect from inside his squad car before running the man over, resulting in the suspect’s death, news reports say.

Officer Jerald Ard has been placed on administrative leave pending the outcome of an investigation by the state, the Pensacola News Journal reports.

The incident took place in the early-morning hours of Saturday, when Officer Ard spotted an individual walking around a construction site.

According to witnesses quoted by the News Journal, when the suspect got onto a bicycle and fled the construction site, Officer Ard pursued in his squad car, flashing his lights and even attempting to Tase the suspect from the moving vehicle.

According to the local Fox affiliate, “the man then crashed his bicycle and fell into the path of the officer’s patrol car.”

One witness who spoke to the press indicated that the Taser may have caused the cyclist to fall of his bike. The News Journal reports:

“The man on the bike was on the sidewalk, boogeying down, trying to get away,” [witness Jamison] Boler said. “The policeman fired a Taser out the window. The guy (on the bike) made a U-turn and ditched the bicycle and kind of did a somersault on the ground. Not two seconds later, the cop car just ran over him,” Boler said. “The cop ran up on the curb and hopped out of the car and said, ‘Where are you at?’ The guy was still underneath his car. You can still see his red shoe sticking out.”

Another witness, David Taylor, 25, said the male, who appeared to be a teenager, was dragged after being stuck beneath the police car. “The kid fell off the bike (after being shocked with a stun gun) and then was stumbling because of the momentum,” Taylor said. “It was probably about 10 to 15 feet that the man was drug.”

The police car came to a stop about 35 feet from the male’s bicycle. The man remained pinned beneath the car for more than three hours before the car was removed and his body was taken away.

The man, who was pronounced dead at the scene, has not been publicly identified. Ard was with the Pensacola police force for four years prior to the incident, the local CBS affiliate reports.