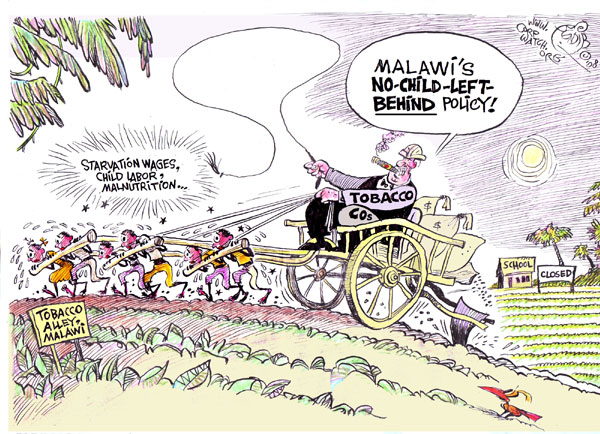 Plan’s researchers invited 44 children from tobacco farms in three districts to take part in a series of workshops. They revealed a catalogue of physical, sexual and emotional abuse and spoke about the need to work to support themselves and their families and pay school fees.

GTS is a common hazard of workers coming into contact with tobacco leaves and absorbing nicotine through their skin, particularly when harvesting. It is made worse by humid and wet conditions, which are prevalent in Malawi, as residual moisture on the leaves helps nicotine to be absorbed quicker.

Everyday symptoms of GTS are more severe in children than adults as they have not built up a tolerance to nicotine through smoking and because of their physical size. There is a lack of research into the long-term effects of GTS in children, but experts believe that it could seriously impair their development.

Neal Benowitz, professor of medicine, psychiatry and biopharmaceutical sciences at California University in San Francisco, said: “Numerous animal studies have shown that administration of nicotine during infancy and adolescence produces long-lasting changes in brain structure and function, as well as behavioural changes that are not seen when nicotine is administered to adults.

“The brain of a child or adolescent is particularly vulnerable to adverse neurobehavioural effects of nicotine exposure.”

Plan called on Malawi’s government to enforce existing child labour and protection laws and on plantations to provide safer, fairer working conditions for those children forced to work. It demanded that multinational tobacco companies scrutinise their suppliers far more closely and follow their own corporate responsibility guidelines.

Macdonald Mumba, Plan Malawi’s child rights adviser, said: “This research shows that tobacco estates are exploiting and abusing children who have a right to a safe working environment.

“Plan is calling for better enforcement of child labour laws and harsher punishment for employers who break them. These children are risking their health for 11p a day.”