Both. The US will default on its debt and the dollar will be destroyed.

Looks like what I have warned all along may be coming to pass sooner than even some of the most bearish investors expected.

It may be not tomorrow but it is coming … and it is soon coming to other countries (UK) too.

Now what people? Land of the poor and home of the slaves? Wake up America!

The Greatest Depression is here.

I have a very disturbing pattern here on a few charts today…. 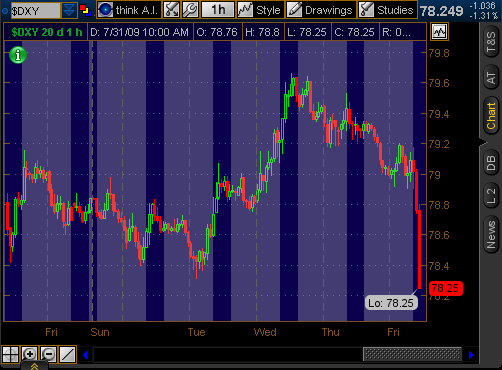 The dollar is getting trashed. 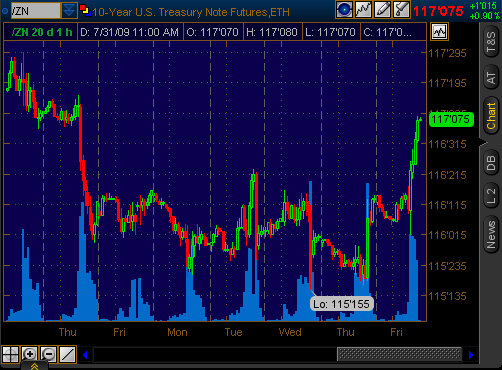 10 year bond futures are skyrocketing (yield collapsing); the yield gapped under a “must hold” trendline this morning and has continued down since. 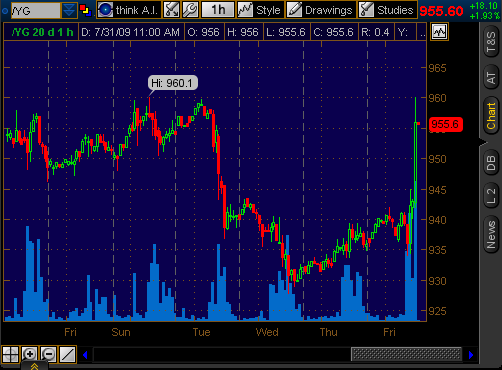 What is this all telling us?

It appears to be that traders in the FX market (who by the way tend to be smarter than the average equity or bond trader) have deduced that the entire “improvement” in 2Q GDP came from government spending.

Well that’s not hard to figure out – it did.

They also appear to be making a bet that the US Government will attempt to continue this, along with The Fed monetizing the debt through its buyback programs to destruction of both the government and currency.

This is not positive for our economy. At all.

But this is the meme today – traders are piling into bonds expecting more Fed buybacks, they are shorting dollars like crazy, and Gold is of course reacting to these two facts.

This is a “collapse of government due to spending into bankruptcy” play folks, or at minimum “currency crisis around the corner.”

Right or wrong this is the trade being put on in size; the dollar selling in particular is especially pernicious and troublesome – that chart is essentially straight down since the GDP release this morning.