Researchers have developed a robot capable of learning and interacting with the world using a biological brain. 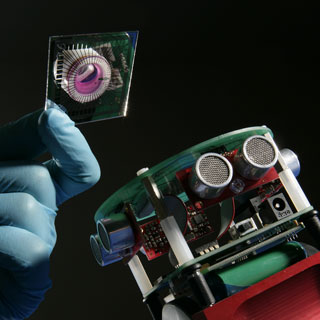 Kevin Warwick’s new robot behaves like a child. “Sometimes it does what you want it to, and sometimes it doesn’t,” he says. And while it may seem strange for a professor of cybernetics to be concerning himself with such an unreliable machine, Warwick’s creation has something that even today’s most sophisticated robots lack: a living brain.

Life for Warwick’s robot began when his team at the University of Reading spread rat neurons onto an array of electrodes. After about 20 minutes, the neurons began to form connections with one another. “It’s an innate response of the neurons,” says Warwick, “they try to link up and start communicating.”

For the next week the team fed the developing brain a liquid containing nutrients and minerals. And once the neurons established a network sufficiently capable of responding to electrical inputs from the electrode array, they connected the newly formed brain to a simple robot body consisting of two wheels and a sonar sensor.

A relay of signals between the sensor, motors, and brain dictate the robot’s behavior. When it approaches an object, the number of electrical pulses sent from the sonar device to the brain increases. This heightened electrical stimulation causes certain neurons in the robot’s brain to fire. When the electrodes on which the firing neurons rest detect this activity, they signal the robot’s wheels to change direction. The end result is a robot that can avoid obstacles in its path.

At first, the young robot spent a lot of time crashing into things. But after a few weeks of practice, its performance began to improve as the connections between the active neurons in its brain strengthened. “This is a specific type of learning, called Hebbian learning,” says Warwick, “where, by doing something habitually, you get better at doing it.”

The robot now gets around well enough. “But it has a biological brain, and not a computer,” says Warwick, and so it must navigate based solely on the very limited amount of information it receives from a single sensory device. If the number of sensory devices connected to its brain increases, it will gain a better understanding of its surroundings. “I have another student now who has started to work on an audio input, so in some way we can start communicating with it,” he says.

But it would be a bit shortsighted to say that adding sensory input devices to the robot would make it more human, as theoretically there is no limit to how many sensory devices a robot equipped with a biological brain could have. “We are looking to increase the range of sensory input potentially with infrared and other signals,” says Warwick.

A robot that experiences its environment through devices like sonar detectors and infrared sensors would perceive the world quite differently from a person. Imagine having a Geiger counter plugged into your brain - or perhaps better yet, an X-ray detector. For future generations of Warwick’s robot, this isn’t just a thought experiment.

But Warwick isn’t interested only in building a robot with a wide range of sensory inputs. “It’s fun just looking at it as a robot life form, but I think it may also contribute to a better understanding of how our brain works,” he says. Studying the ways in which his robot learns and stores memories in its brain may provide new insights into neurological disorders like Alzheimer’s disease.

Warwick’s robot is dependent upon biological cells, so it won’t live forever. After a few months, the neurons in its brain will grow sluggish and less responsive as learning becomes more difficult and the robot’s mortal coil begins to take hold. A sad thought perhaps - but such is life.

2 thoughts on “The Living Robot”