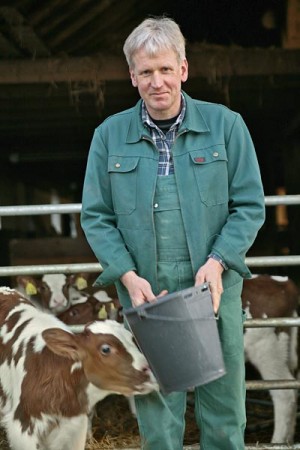 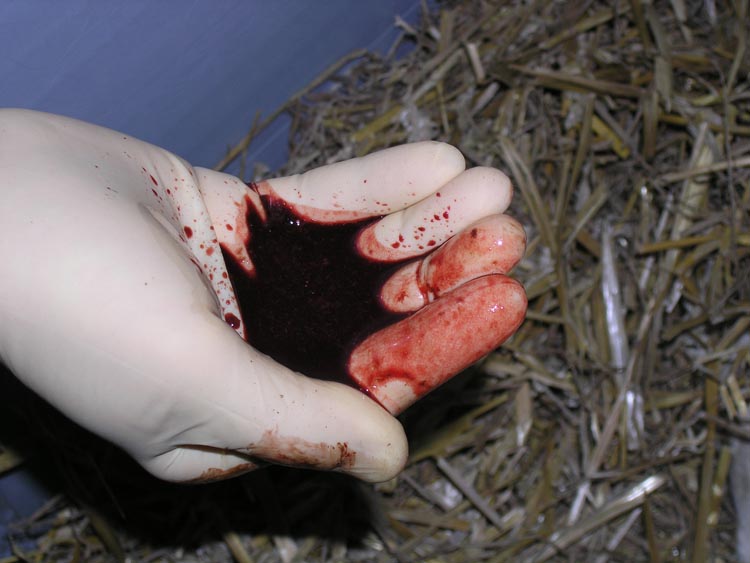 Veterinarian Ottmar Distl warns: “Do nothing! Whatever you do, don’t touch them! You will injure the calf the minute you touch it, and it will hemorrhage. Then you won’t be able to do anything else for the animal.”

Meyboom, a farmer from Wesel in the Lower Rhine region of western Germany, has lost seven animals since the first calf bled to death in his barn in October 2007. The last calf died an agonizing death only a few weeks ago. Farmers refer to the victims as “blood sweaters,” alluding to the way blood seems to seep from the pores in some of the calves.

A mysterious disease is rampant in Germany’s cattle barns. The afflicted two-to-three-week-old calves begin bleeding massively and are often dead within hours. More than 100 cases have been documented throughout Germany, most of them in Bavaria, but the number of unreported deaths is believed to be much higher. Cases have also been reported in Belgium, but experts are still puzzled over what causes the condition.

“This disease is still very mysterious, and clarification is urgently needed,” says Wolfgang Klee of the Clinic for Ruminants at the University of Munich in Oberschlessheim on the city’s outskirts. Ottmar Distl of the University of Veterinary Medicine Hanover describes the bleeding calf phenomenon as “terrifying.” “We rarely see diseases that are fatal in so many affected animals,” he adds.

Veterinarians have been studying the unexplained deaths for the past two years, and the results of their efforts began to emerge last year. “Affected animals bleed from various parts of the body, sometimes from skin that is seemingly intact,” says Klee. He has observed bleeding in the mucous membranes, blood accumulating under the white part of the eye, and blood oozing from the tiniest of cuts. The animals develop a fever and soon die.

The experts have discovered massive bleeding of the subcutaneous tissue and intestines. The bone marrow is also severely damaged, and veterinarians describe its consistency as “gel-like.” Blood cells are formed in the bone marrow, and the sick animals apparently lack platelets, which are indispensible for coagulation. In addition, the calves’ white blood cell counts are substantially lower than normal, making the animals more susceptible to infection.

The unexplained illness has farmers deeply worried. Hildegard and Josef Kirmeier, from the Bavarian town of Wurmsham, have already lost five calves. “Perhaps the soy we add to the feed is genetically modified,” Kirmeier speculates. Or could a vaccination be causing the problem?

The theories, some of them outlandish, run rampant on Internet sites catering to farmers, such as a chat room for women farmers called “Bäuerinnentreff.” The farmers have discussed everything from poisonous ferns to “decades of abusive inbreeding,” solar panels and the “radiation from radio towers” as possible causes of the illness.

Many farmers blame the “blood sweating” on a controversial vaccine against bluetongue disease, which became mandatory for cattle in Germany in April of last year.

Since then, farmers who refuse to vaccinate their animals are threatened with fines. One of them is Gertraud Schützeneder, who operates an organic farm with her husband Konrad in the Bavarian town of Simbach am Inn. “We do not want to subject our animals to the vaccination,” says the determined farmer. Schützeneder is convinced that the mysterious blood-sweating condition is “somehow indirectly related to the vaccination.”

At a “farmers’ pilgrimage” two weekends ago, the Schützeneders and 600 other farmers even prayed to the Black Madonna of Altötting to have mercy on their bleeding calves. The words “Holy Mary, help us in our hour of need,” resounded across the church square. In their invitation to the event, the organizers wrote: “Because there is apparently no help to be expected from any worldly source, we intend, in making this pilgrimage, to beg for protection and help from the Virgin Mary, the patron saint of Bavaria.”

Veterinarians, on the other hand, are frantically trying to find a scientific explanation. The vaccination against bluetongue disease is not responsible for the blood sweaters, says expert Distl, who notes: “calves of mothers that were not vaccinated have also contracted the illness.” The scientists also believe that genetic defects are unlikely as a cause, because the problem has affected calves from three different breeds. They have also ruled out a viral or bacterial infection, because the animals are not infecting each other. Pesticides or genetically modified feed are not the cause, says Distl, explaining that “the distribution of cases simply does not bear this out.”

But other observations are striking. For example, there have been strange clusters of “up to more than 40” sick calves at individual farms, says Klee. Besides, all animals Klee has examined came from farms that vaccinate against Bovine Virus Diarrhea (BVD). The ailment can cause symptoms similar to those of the mysterious blood sweating, but calves are not even immunized against BVD.

“So far, we have a few pieces of the puzzle, but not enough to put together a cohesive picture,” says Klee. The scientists now plan to pursue one lead more intensively. In their first few hours of life, calves drink their first mother’s milk, known as breastings. Scientists believe that this initial breast milk, which is so important for the young animals, could contain antibodies that attack and destroy the bone marrow. “The symptoms always occur after the calves have received their first breastings,” says Distl.

There is still no proof to this hypothesis, and scientists continue to search for the possible causes. Beginning in April, the Bavarian State Office of Health and Food Safety will systematically test milk and blood. Veterinarian Klee plans to survey fellow veterinarians throughout Germany to learn about their experiences. A meeting at the Federal Ministry of Food, Agriculture and Consumer Protection in Berlin is scheduled for the end of the month. “The government must make the problem a high priority,” says Distl.

Until then, farmers will likely have no other choice but to hope for help from above. The most devout in their midst place consecrated bunches of herbs in their homes, barns and gardens. An alternative practitioner for animals recently announced that he had healed a calf with a homeopathic remedy derived from snake venom. But Klee dismisses the claim, saying that an analysis of a blood sample from the animal revealed that it was not a blood sweater, after all.

Veterinarians have at least seen some success, and a few calves have survived the grim bloodletting after being given blood transfusions. The vets have also started treating concomitant disorders, like pneumonia and diarrhea.

And then there are the less orthodox methods. Distl has three animals in his barn that recently almost bled to death. His treatment approach is not exactly the stuff of intensive care medicine.

“Do nothing!” says the veterinarian. “Whatever you do, don’t touch them! You will injure the calf the minute you touch it, and it will hemorrhage. Then you won’t be able to do anything else for the animal.”

Translated from the German by Christopher Sultan