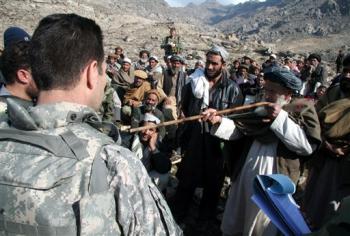 An Afghan villager elder holds his walking stick, as he talks with US soldiers who have come to pay money for repairing of the homes which were destroyed during the recent US raids in Inzeri village of Tagab Valley in Kapisa province north of Kabul, Afghanistan, Tuesday, Jan. 27, 2009. An angry Afghan man with a thick black beard and one eye ranted wildly at the U.S. officials, shouting about how their raid had killed 16 civilians in his village. An Afghan elder cried out in grief that his son and four grandsons were killed. (AP Photo/Jason Straziuso)

MEHTERLAM, Afghanistan (AP) – An angry Afghan man with a thick black beard ranted wildly at the U.S. officials, shouting about how their overnight raid had killed 16 civilians in his village. An Afghan elder cried out in grief that his son and four grandsons were among the dead.

One after another, a long line of government officials, villagers and community leaders told American military officials at the Laghman governor’s compound that Afghan soldiers must be allowed to take part in such raids. Several predicted increased violence against U.S. forces if more nighttime operations take place.

“If these operations are again conducted in our area, all of our people are ready to carry out jihad. We cannot tolerate seeing the dead bodies of our children and women anymore,” Malik Malekazratullah, the Afghan who ranted at the Americans, told The Associated Press. “I’ve already told President Karzai we are out of patience.”

U.S. officials said it was possible the conventional American troops stationed in Laghman province – a separate group from the Special Forces units that carried out the nighttime raids – could face an increased risk of attack.

“Anytime there is that kind of public outcry, you can imagine that there are some people out there who may take that and put it into action,” said Lt. Col. Dan Fuhr, the top U.S. commander in Laghman, one province east of Kabul.

The overnight raids target what U.S. officials say are known insurgent leaders. The specially trained Special Forces are dropped off outside a village by helicopter, then move in to capture or kill their targets.

The problem, Afghan officials say, comes when ordinary civilians hear the commotion. Fearing robbers or an attack from a hostile tribe, the close-knit villagers grab their guns and run outside or fire from their homes. U.S. forces then fire back and end up killing civilians doing nothing more than answering the call to defend their neighbors.

Afghan officials say an overnight raid Jan. 7 in the village of Masmoot in Laghman killed 19 civilians. A raid in Kapisa on Jan. 19 killed 15 people, mostly civilians. And a second Laghman raid Jan. 23, in Guloch village, killed 16, they say.

Even if the Special Forces nail their intended target, when raids go wrong they end up killing Afghan civilians as well, turning whole villages against the Afghan government and the presence of U.S. forces.

“Maybe there were only two or three insurgents in Guloch, but I can tell you that there are thousands now,” Abdul Qadir Kochai, a member of parliament on a delegation sent by Karzai, told the U.S. officials.

Some 60 people gathered in the Laghman governor’s compound on Wednesday to air their complaints. It was the fifth meeting held there over the two civilian death incidents in Laghman.

The U.S. officials listened dutifully to the complaints. They apologized for unintentional deaths and promised increased cooperation.

“We know these raids have left many widows and orphans, and we want your advice on how we should help them,” Fuhr told the group Wednesday. One day earlier, U.S. officials paid Afghan villagers in neighboring Kapisa province $40,000 for the deaths of 15 Afghans there.

Laghman’s governor, Latifullah Mashal, called for more U.S.-Afghan coordination in the overnight operations. He said the Taliban are purposely mingling among villagers in the hopes that civilians die.

“One young boy said his whole family was killed, and now he wants to become a suicide bomber. This is a very negative message,” Mashal said. “The Taliban are succeeding at having a whole village turn against the government. They are being told to do this.”

Col. Greg Julian, who led the U.S. team in the meeting on behalf of Gen. David McKiernan, the overall commander of U.S. and NATO troops in Afghanistan, said most overnight raids are carried out without any civilian deaths or injuries. But he said botched raids do have a negative effect on the conventional forces based in the regions.

“It does put those troops that are in there all the time at risk because they (Afghans) can’t distinguish between these troops and any other troops that operate in their area,” Julian said.

Fuhr, 44, a member of the Illinois National Guard from Park Ridge, Illinois, said there were a “few indicators” of increased danger to his 400 troops in Laghman. But he said it was too soon to tell if angered villagers would carry out violence. “We’re certainly putting ourselves in a more vigilant posture just in case,” he said.

Fuhr said the two civilian death cases in his area reinforce for him the importance of making sure Afghans take the lead in delicate military operations. Julian said elite Afghan commandos are being trained to take part in overnight missions, but he didn’t know if or when Afghans would take part in every overnight raid.

Afghan officials say Afghans soldiers could prevent the kinds of deaths that Abdul Mateen, a village elder from Masmoot, described at the meeting. Mateen said a woman tried to leave the village to escape the battle.

“Then someone shouted at her. Maybe they told her to stop, but she couldn’t understand, so they shot her,” Mateen told the group. “So even people trying to get away couldn’t escape.”

Mashal, the governor, pleaded with his U.S. guests: “You don’t allow us to lead, but at least put us on board.”

“We have to avoid the Taliban from making us look like the bad guys, to find a way to have a little bit of coordination and to have an Afghan in the lead,” he said.