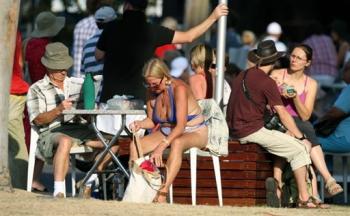 Spectators seek shade at the Australian Open in Melbourne

MELBOURNE (AFP) – Australia’s second-largest city Melbourne ground to a halt Saturday, crippled by a once-in-a-century heatwave that has claimed almost 30 lives and razed at least 17 homes.

Wildfires raged through the southeastern state of Victoria, where authorities said flames had come dangerously close to major electricity transmission lines which supplied power to Melbourne on Saturday.

More than 500,000 homes and businesses in Melbourne were left without power on Friday night after an electrical substation exploded in the heat, bringing the city to a standstill.

Temperatures in Victoria topped 43 degrees Celsius (109 Fahrenheit) for a record-breaking third consecutive day on Friday, when 10 homes and a timber plantation were destroyed in a 6,500 hectare (16,000 acre) blaze.

The heat was blamed for a spike in sudden deaths in the neighbouring state of South Australia, which was in the grip of its hottest weather since 1908.

At least 22 people died in the South Australia capital, Adelaide, on Friday, said the state’s health minister John Hill. Most were older than 70 and had likely just “succumbed to the heat,” he said.

By Saturday morning the state’s ambulance service said it had recorded another six deaths in a period of just three hours and expected to at least equal Friday’s count by the day’s end.

In Melbourne, the power cut meant all trains were cancelled, city buildings were evacuated, and rescue crews were called in to free workers trapped in office tower elevators.

Patients were turned away from overstretched hospitals running on reserve generator power.

“The line … literally exploded in the heat, and I don’t know if anyone could ever have prevented that from occurring,” Victoria’s premier John Brumby told Sky News.

“We’re in unchartered waters, unprecedented conditions, and with the week and hot weather (we’ve had) some of these systems have never been designed to operate in 44 to 45 degree heat,” he said.

The unrelenting heat is forecast to continue for the next seven days, according to Australia’s Bureau of Meteorology. Temperatures have topped 48 degrees in country areas, the bureau said.