The confrontaion between North and South Korea has escalated with Kim Jong-il’s regime claiming it was on the ‘brink of war’ after tearing up a non-aggression pact signed in 1991. 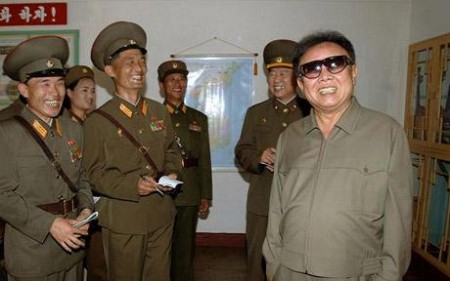 North and South Korea stand on the ‘brink of war’ as Kim Jong-il’s tears up the non-aggression pact Photo: REUTERS

In a significant escalation of tensions, North Korea cancelled all military and political agreements after accusing Seoul of aggressive posturing.

Pyongyang’s decision to nullify all accords increases the prospect of an armed confrontation on the Peninsula, where over a million soldiers face each other across the Demilitarised Zone that divides the two Koreas.

North Korea’s Committee for the Peaceful Reunification of Korea blamed the South for pushing the two countries “to the brink of a war”.

Pyongyang said it now regarded the maritime border between the two states as “void”. The last time the two countries clashed militarily was at the disputed frontier in the Yellow Sea, when their navies fought a deadly gun battle in June 2002.

In comments reported by state media in North Korea, the Committee, which is in charge of inter-Korean affairs, claimed that the relationship between the two sides had sunk to a new low.

“There is neither way to improve (relations) nor hope to bring them on track,” the committee was quoted as saying. It described the agreements as “dead documents” and warned the South that its policies would result in its “shameful destruction”.

Since the start of the year, Pyongyang has been increasingly critical of its neighbour. Earlier this week, it attacked the choice of Hyun In-taek as the new head of South Korea’s Unification Ministry, saying it was evidence that its neighbour was planning a confrontation between the two states, a claim denied by Seoul.

But the North has reserved its greatest ire for South Korean President Lee Myung-bak, who it has described as a “traitor”.

Mr Lee has cut the amount of aid given to the North and insists that will continue until progress is made on disarming Pyongyang’s nuclear arsenal.

“The North is using the warning of an armed maritime clash to pressure Seoul to change its hardline stance,” said Yang Moo-Jin, a professor at the University of North Korean Studies in Seoul. Analysts believe that Pyongyang’s move is also an attempt to focus the attention of America’s new president on the Peninsula. The Six-Party talks aimed at ending North Korea’s possession of nuclear weapons have been stalled since last August, with the North’s leader Kim Jong-il thought to be waiting to see the approach of President Obama towards the rogue state.

Kim, who is believed to have recovered from the stroke he suffered in August, wants closer ties with the US. Years of global isolation have left the North impoverished and reliant on aid from China and South Korea to survive. Having long used its nuclear capability as a way of extracting concessions from the US, the North has come under increased pressure from Beijing to restart the Six-Party Talks.

South Korea expressed “deep regret” at the North’s cutting of ties. “We urge North Korea to accept our call for dialogue as soon as possible,” said Kim Ho-Nyoun, the spokesman for South Korea’s Unification Ministry. But the South’s armed forces have been on high alert since earlier in the month and it has vowed to maintain the border in the Yellow Sea, which was imposed at the end of the 1950-53 Korean War by the US-led UN forces. As the conflict ended with a truce and not a peace treaty, the two Koreas are technically still at war.