Deutsche Bank has also difficulties to finance the Postbank acquisition, that is why Deutsche Post will buy a stake – around 10% – in Deutsche Bank. 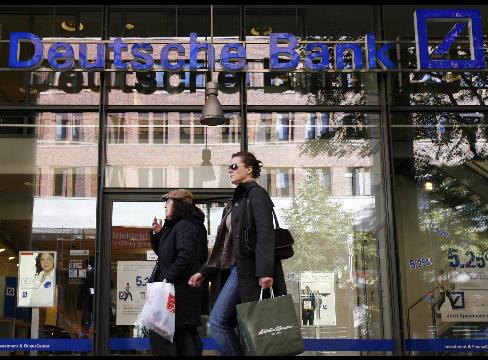 The bank fell as much as 13 percent in Frankfurt trading. The loss, which compares with a profit of about 1 billion euros a year earlier, also reflects provisions for debt backed by bond insurers and “substantial injections” of cash into money market funds, the Frankfurt-based bank said today.

Deutsche Bank has “scaled back or exited trading strategies most affected by market turbulence,” Chief Executive Officer Josef Ackermann said in a statement. The German bank lost about $1 billion from bad bets involving bonds hedged by credit-default swaps in the quarter, plus $500 million trading equities, two people with knowledge of the matter said this week. The company reported its first annual loss in more than 50 years.

“The enormous fourth-quarter and full-year loss is a shock to investors,” Michael Seufert, an analyst at NordLB in Hanover with a “sell” rating on Deutsche Bank, wrote in a note to clients today. “The process of reducing risks and scaling down the balance sheet is proving to be very painful.”

Separately, Deutsche Post AG, the country’s largest mail carrier, said today it will take a stake of about 8 percent in Deutsche Bank as part of a revised deal to sell shares in Deutsche Postbank AG to Germany’s biggest bank.

Deutsche Bank said its fourth-quarter loss reflects “exceptional market conditions, which severely impacted results in the sales and trading businesses.” Credit trading, as well as buying and selling stocks and bonds for the bank’s own account, were hardest hit, the company said in the statement.

Goldman Sachs and JPMorgan of New York, which along with Deutsche Bank mostly sidestepped the meltdown of the U.S. subprime mortgage market, face losses as investment-grade bonds had the worst performance in at least 35 years and stock markets headed for their biggest rout.

For the year, Deutsche Bank had a loss of about 3.9 billion euros. The company, which was scheduled to publish earnings in early February, didn’t provide results for individual units.

Ackermann aims to shrink Deutsche Bank’s assets and reduce the company’s dependence on borrowed money to avoid raising funds from investors or taking a handout from the government. Deutsche Bank set a goal of cutting the bank’s leverage ratio — total assets divided by shareholder equity, using U.S. accounting principles for derivatives — to 30 times by the end of the first quarter from 38 times at the end of June.

“This is bad news that had to be feared as Deutsche Bank didn’t have an alternative to reducing its risk positions,” said Lutz Roehmeyer, who helps manage about $16 billion at Landesbank Berlin Investment in Berlin and owns Deutsche Bank shares.

The CEO reiterated on Nov. 21 that the company doesn’t need capital from Germany’s 500 billion-euro bank-rescue fund and instead will rely on “internal measures” such as selling stock. The plan not to seek government aid is unchanged, a person close to the matter said last week.

Ackermann, speaking in an interview with Germany’s ARD television on Dec. 29, said he “absolutely” underestimated the severity of the crisis and had expected markets to improve. “This was abruptly ended by the collapse of Lehman, and since then it’s been really, really bad,” he said.

His counterpart at JPMorgan, Jamie Dimon, called November and December “terrible” for businesses including trading.

Goldman Sachs, the world’s most profitable securities firm last year, had a fourth-quarter loss of $2.1 billion, its first since going public in 1999. Credit Suisse, the second-biggest Swiss bank, said Dec. 4 it will eliminate 5,300 jobs after about 3 billion Swiss francs ($2.7 billion) of losses in the previous two months. The Zurich-based company said the investment bank posted a “significant” pretax loss in October and November.