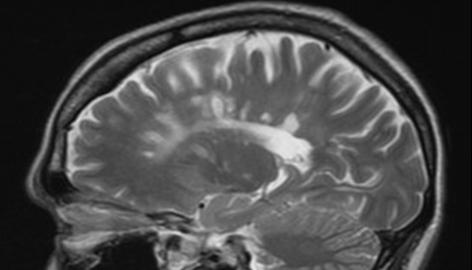 An MRI shows white plaques in the center of the brain that could indicate MS. UCSF Multiple Sclerosis Center

They said nearly a third of people who showed signs of the disease on brain MRIs developed the disease within five years.

Multiple sclerosis occurs when the immune system attacks the myelin sheath protecting nerve cells. It affects 2.5 million people globally and can cause symptoms ranging from vague tingling to blindness and paralysis.

Dr. Darin Okuda of the University of California, San Francisco studied brain scans done on 44 people for various health reasons, such as migraine or head injuries.

All had abnormalities similar to those seen in people with MS, but none had been diagnosed with the disease. Okuda continued to follow these people to see if they developed the disease and found that within 5.4 years, 30 percent had developed MS symptoms.

“More research is needed to fully understand the risk of MS for people with these brain abnormalities, but it appears that this condition may be a precursor to MS,” Okuda, whose study appears in the journal Neurology, said in a statement.

He said further research is needed before doctors begin treating people with these pre-MS abnormalities.

Dr. Dennis Bourdette of the Oregon Health & Science University in Portland said in a commentary in the journal that an MS diagnosis can be upsetting and may mean treatment with strong drugs that could cause side effects. He cautioned that people should not be told they have MS unless they have symptoms of the disease.

“Patients must have symptoms to receive a diagnosis,” Bourdette wrote. “For now, it’s best to remember the wise advice that we ‘treat the patient, not the MRI scan.'”