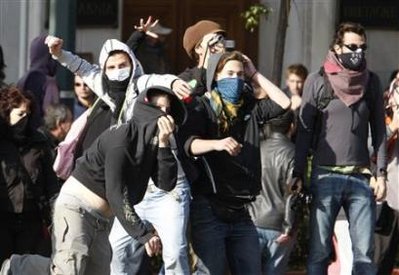 Protesters throw stones at riot police during clashes in front of the Greek parliament building in Athens, December 10, 2008. (Oleg Popov/Reuters

MADRID, Spain – The unrest that has gripped Greece is spilling over into the rest of Europe, raising concerns the clashes could be a trigger for opponents of globalization, disaffected youth and others outraged by the continent’s economic turmoil and soaring unemployment.

Protesters in Spain, Denmark and Italy smashed shop windows, pelted police with bottles and attacked banks this week, while in France, cars were set ablaze Thursday outside the Greek consulate in Bordeaux, where protesters scrawled graffiti warning about a looming “insurrection.”

At least some of the protests were organized over the Internet, showing how quickly the message of discontent can be spread, particularly among tech-savvy youth. One Web site Greek protesters used to update each other on the locations of clashes asserted there have been sympathy protests in nearly 20 countries.

More demonstrations were set for Friday in Italy, France and Germany.

Still, the clashes have been isolated so far, and nothing like the scope of the chaos in Greece, which was triggered by the police killing of a teenager on Saturday and has ballooned into nightly scenes of burning street barricades, looted stores and overturned cars.

Nevertheless, authorities in Europe worry conditions are ripe for the contagion to spread.

As Europe plunges into recession, unemployment is rising, particularly among the young. Even before the crisis, European youths complained about difficulty finding well-paid jobs – even with a college degree – and many said they felt left out as the continent grew in prosperity.

In Greece, demonstrators handed out fliers Thursday listing their demands, which include the reversal of public spending cuts that have brought more layoffs, and said they were hopeful their movement would spread.

“We’re encouraging nonviolent action here and abroad,” said Konstantinos Sakkas, a 23-year-old protester at the Athens Polytechnic, where many of the demonstrators are based. “What these are abroad are spontaneous expressions of solidarity with what’s going on here.”

Across the continent, Internet sites and blogs have popped up to spread the call to protest.

Several Greek Web sites offered protesters real-time information on clash sites, where demonstrations were heading and how riot police were deployed around the city. Protest marches were arranged and announced on the sites and via text message on cell phones.

In Spain, an anti-globalization Web site, Nodo50.org, greeted visitors with the headline “State Assassin, Police Executioners” and told them of hastily called rallies Wednesday in Barcelona and Madrid.

“We stand in solidarity” with the Greek protesters, the site said.

Elsewhere in Europe, reports about the clashes in Greece were quickly picked up online by citizen journalists, some of whom posted details of confrontations on Twitter. At the Independent Media Center, photos and video of the demonstrations were uploaded and plans were listed for “upcoming solidarity actions” in London, Edinburgh and Berlin.

One writer on the site london.indymedia.org exhorted people to follow the Greek example and “reclaim the streets. Burn the banks that robbed you … It is a great opportunity to expand the revolution in all europe.”

“What’s happening in Greece tends to prove that the extreme left exists, contrary to doubts of some over these past few weeks,” French Interior Ministry spokesman Gerard Gachet told The Associated Press.

But, he added, the coming days and weeks would determine whether “there’s a danger of contagion of the Greek situation into France.”

In cities across Europe, protests flared in solidarity with the demonstrations in Greece.

One rally outside the Greek Embassy in Rome turned violent on Wednesday, damaging police vehicles, overturning a car and setting a trash can on fire. In Denmark, protesters pelted riot police with bottles and paint in downtown Copenhagen; 63 people were detained and later released.

And in Spain, angry youths attacked banks, shops and a police station in Madrid and Barcelona late Wednesday. Some of the protesters chanted “police killers” and other slogans. Eleven people – including a Greek girl – were arrested at the two rallies, which drew a total of about 200 protesters.

Still, he said he doubted the protests in Spain would grow.

“We do not have the feeling that this is going to spread,” Lostao said. “Let’s hope I am not wrong.”

Graffiti reading “solidarity with the fires in Greece,” was scrawled on the consulate and the word “insurrection” was painted on the doors of neighboring houses.

“The events in Greece are a trigger” for French youth angry by their own lack of economic opportunity, Corfias said.