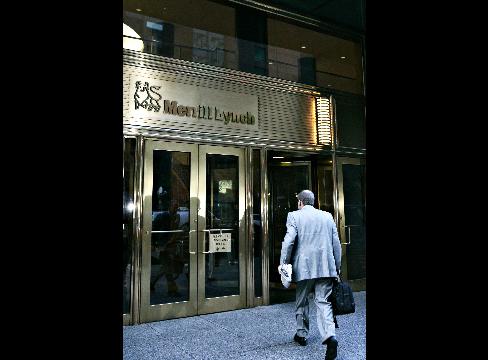 Most of the cuts will fall in information technology, operations and “corporate functions,” Thain, 53, said in a Bloomberg Television interview in Dubai today. Jobs in the fixed income and commodities divisions won’t be eliminated after the deal, he said.

“We haven’t mapped it out in terms of actual number of people, but we are committed to saving $7 billion across the combined platforms, and that will be a challenge,” Thain said. “Between our two companies it will be clearly thousands of jobs.”

Thain turned to Bank of America CEO Kenneth Lewis last month after a crisis of confidence in Wall Street firms forced Lehman Brothers Holdings Inc. into bankruptcy and raised speculation Merrill could be vulnerable. The firm has already cut more than 5,000 jobs in the past 18 months, taking its headcount to about 60,000, in an effort to rein in costs as credit markets froze.

Thain said he expects those markets to thaw over the next six to twelve months after governments in Europe and the U.S. injected trillions of dollars into banks last week to avert a financial crisis. The U.S. government will inject $125 billion into banks, including $25 billion into Bank of America, which is based in Charlotte, North Carolina, and New York-based Merrill.

Interbank lending rates, which had surged as banks hoarded cash after the U.S. subprime market collapsed, have fallen from records. The London interbank offered rate, or Libor, which banks charge each other for three-month loans in dollars, last week posted its first weekly drop since July.

The government plan won’t avert a recession, Thain added. “Over the next 12 months we are still going to be in a global recession,” he said. “I don’t think the economies of the world will recover quickly. Clearly the U.S. economy is contracting significantly. The question for me is how deep and how long the recession will be.”

The bank racked up $52.2 billion in losses and writedowns from subprime-contaminated securities before Oct. 16. The company’s stock has plunged about 81 percent in New York trading from a peak of $97.53 at the start of last year. Thain will oversee corporate and investment banking and wealth management at the combined firms, making him a potential successor to the 61- year-old Lewis.

“Even in a more difficult economic environment, the Merrill Lynch pieces of the now combined companies, will in fact be profitable next year,” Thain said.

Banks from New York to London have pared more than 130,000 jobs since June 2007 as firms including Lehman and Bear Stearns Cos. collapsed. Banks and insurers have booked more than $661.2 billion in losses and writedowns since the global credit crisis began about 14 months ago, according to data compiled by Bloomberg.