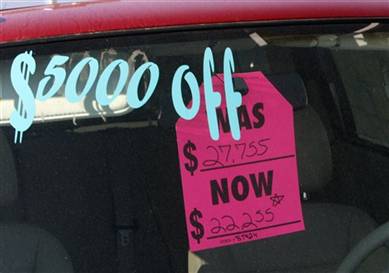 It was Ford’s worst sales month this year, and the results are a strong indication that analysts’ forecasts of another dismal month will come true.

Hyundai Motor Co., whose single-digit sales decline this year has looked like a success against the Detroit automakers’ slide, reported its U.S. sales fell 25 percent. Other automakers are set to release their results later Wednesday.

Analysts have predicted September declines of more than 20 percent for most major automakers when compared with the same month last year as upheaval in the financial markets unnerved consumers.

“Even if you have good credit, there’s a reluctance to pull the trigger on a big ticket item,” he said.

Farley also announced that the marketing campaign for the new F-150 pickup would begin in November, a month earlier than Ford had projected, and the trucks already are on their way to showrooms. It took less time than expected to sell down the 2008 inventory, he said.

If overall U.S. industry sales drop in September, it will be the 11th straight monthly decline when compared with the year-ago period. That would be the longest string of down months since 14 straight negative months ended in December 1991, according to Autodata Corp.

Dealers from many manufacturers have said their customers are having an increasingly hard time qualifying for loans to buy autos, as banks have restricted lending because of widespread mortgage defaults that led to disruptions in the financial markets and the collapse of several banks. Plus, several automakers’ finance arms have limited or discontinued leasing.

Ford sales also were hurt as buyers continued to favor small fuel-efficient cars over trucks and sport utility vehicles. Truck sales were down 39 percent, while car sales dropped 19 percent. The numbers do not include Ford’s Volvo Cars unit.

There were few bright spots in Ford-Lincoln-Mercury model lineup last month, with sales of all but three models far lower than the same month a year ago. Sales increased only on the Focus small car, up 5 percent; the Crown Victoria large sedan, up 3 percent; and the Lincoln Town Car, up 69 percent. Sales of F-series pickup trucks, Ford’s top selling vehicle, were down almost 42 percent for the month.

Ford, like its U.S.-based competitors, has been trying to shift its factories and model lineup from trucks and SUVs to more efficient cars and crossover vehicles, while burning through billions of dollars in cash. The Dearborn-based automaker has lost $23.9 billion in the past 2½ years and has had to mortgage its assets to stay in business.

General Motors Corp. has performed strongly overseas but plummeting demand for its most profitable products in the U.S. has led to losses of $57.5 billion in the past 18 months, including $15.5 billion in the second quarter.

The Associated Press reports unadjusted auto sales figures, calculating the percentage change in the total number of vehicles sold in one month compared with the same month a year earlier. Some automakers report percentages adjusted for sales days. There were 25 sales days last month, one less than in September 2007.