Digital body scanners which leave little to the imagination will be used by airport security on passengers travelling across the European Union within two years. 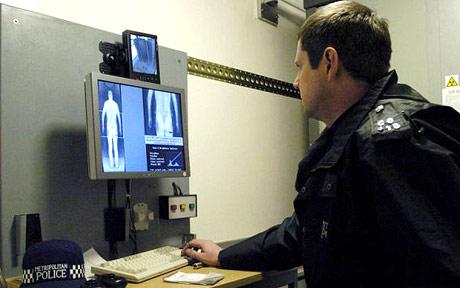 The new imaging technology creates an image of an unclothed body which privacy critics argue ‘amounts to a virtual strip search’ Photo: PA

According to a draft European Commission regulation, seen by The Daily Telegraph, the new millimetre wave imaging scanners are to be used “individually or in combination, as a primary or secondary means and under defined conditions” to provide a “virtual strip search” of travellers.

The new EU regulation, which will be binding on Britain, is intended to enter into force across the continent by the end of April 2010.

Dominic Grieve, Shadow Home Secretary, stressed that while body scanners may be an effective security tool “the implementation must be carried out by the British government in a proportionate manner, based on UK security requirements rather than the dictates of Brussels”.

“Ministers need to explain publicly and transparently what these proposals are and why they are suitable to the UK,” he said.

The new imaging technology creates an image of an unclothed body which privacy critics argue “amounts to a virtual strip search” has been tested on a voluntary basis at Heathrow’s Terminal Four.

But the trial has now been discontinued, said a Heathrow spokeswoman.

Air passengers scanned by the new technology walk into a large booth where electromagnetic waves are beamed on to their body to create a virtual three-dimensional “naked” image from reflected energy.

Many travellers have been alarmed by the graphic nature of the black and white images body scanners generate – including revealing outlines of genitalia – raising concerns about privacy.

Gareth Crossman, Director of Policy at Liberty, said: “I don’t think people are aware of what these scanners can do and how demeaning it is to have your body on display. Heathrow was right to discontinue their use and they should not be used in Britain except as an alternative to strip searches.”

Security officials in the United States have pioneered use of the scanners at New York and Los Angeles airports because the technology reveals the contours of the body, picking up hidden items, such as guns or knives, more effectively than standard physical “pat-down” checks.

Tony Bunyan, the editor of Statewatch, fears that Brussels is rushing to follow the US by introducing a technology that could subject “people including women, old people and children to such a shameful and undignified experience”.

He added: “It would appear that this is yet another case of ‘if it is technologically possible it should be used’ without any consideration of proportionality, privacy and civil liberties.”

Paolo Costa, Chairman of the European Parliament’s Transport Committee, is concerned over the safety of the new technology and how “nude” images of passengers will be viewed, then stored, by security officials.

“How will the image data be held and how will it be destroyed?

Timothy Kirkhope, a Conservative Euro-MP who sits on the transport committee, is concerned that the new security regulations will be introduced without discussion or consultation with the travelling public.

“It must not be the case that unelected Commission officials, or security bureaucrats, can introduce these measures without elected MEPs or MPs being able to anything about it,” he said.