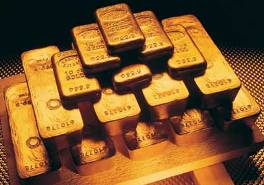 Investors in gold are demanding “unprecedented” amounts of bullion bars and coins and moving them into their own vaults as fears about the health of the global financial system deepen.

Industry executives and bankers at the London Bullion Market Association annual meeting said the extent of the move into physical gold was unseen and driven by the very rich.

“There is an enormous pick-up in investment demand. I have never seen a market like this in my 33-year career,” said Jeremy Charles, chairman of the LBMA. “The gold refineries cannot produce enough bars.”

The move comes as fears grow among investors over the losses at investment vehicles previously considered almost risk-free, such as money funds.

Philip Clewes-Garner, associate director of precious metals at HSBC, added that investors were not flying into gold simply because they saw it as a haven amid Wall Street’s woes. “It is a flight into gold because it is a physical asset,” he said.

“Vault staff are also doing overtime,” another banker at the LBMA meeting said, adding that investors in some countries were paying premiums of up to $25 an ounce above the London spot price to secure scarce gold bars.

Spot gold prices in London on Tuesday traded at about $900 an ounce, more than 25 per cent above the level before Lehman Brothers’ collapse. Although some traders said the rush into physical gold could boost prices, others cautioned that prices were depressing jewellery demand, capping any price gain. Industry executives said gold refineries and government mints were working at full throttle to keep up with investor demand, but acknowledged they were suffering from shortages, particularly on coins.

Johan Botha, a spokesman for the Rand Refinery in South Africa, which manufactures the Krugerrand, the world’s most popular gold coin, said the plant was now running at full capacity seven days a week. “Even so, now and then we have shortages,” he said.

The Austrian mint, which manufactures the Vienna Philharmonic, a popular gold coin in Europe, said it had extended work to the weekends to accommodate soaring demand.

Last week, the US mint suspended the sale of its American Buffalo coin after it ran out of stocks.