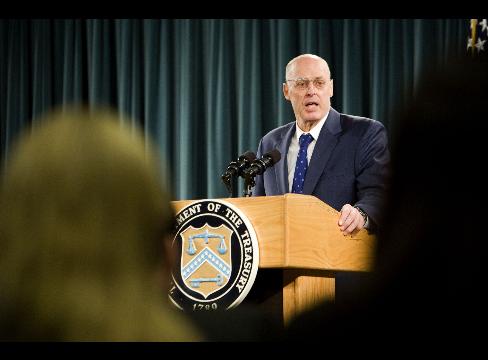 Ohmae, nicknamed “Mr. Strategy” during his 23 years as a McKinsey & Co. partner, called for a $5 trillion “international facility” to be made available to financial institutions. The system could be modeled on one used by Sweden during its banking crisis in the early 1990s, he said.

“This is a liquidity crisis,” Ohmae said at an investor forum hosted by CLSA Asia-Pacific Markets, the regional broking arm of Credit Agricole SA, in Hong Kong yesterday. “The liquidity has to be so big that people won’t get panicky.”

Paulson’s proposal to remove hard-to-sell assets clogging the financial system marks the broadest intervention since at least the Great Depression. Asian stocks fell today, following U.S. shares lower as investors questioned whether the effort is enough to prevent a recession.

The plan came after the collapse of 158-year-old Lehman Brothers Holdings Inc. and the government takeover of insurer American International Group Inc. caused financial markets to seize up last week. The calamity was the culmination of a year during which the U.S. housing market slump left banks and securities firms with more than $520 billion of asset writedowns and credit losses.

Yesterday, Paulson and lawmakers narrowed their differences on the plan and agreed that the U.S. should get equity in participating companies.

Ohmae, 65, is the author of management books including “The Mind of The Strategist,” “The Borderless World” and “The End of the Nation State.” Business Breakthrough, founded in 1998, provides online management training.

One way of funding the $5 trillion facility would be through contributions from foreign exchange reserves in China, Japan, Taiwan, the Gulf states, the European Union and Russia, Ohmae said.

An international relief effort on that scale might be difficult to coordinate, said Robert Howe, founder of Hong Kong- based hedge fund manager Geomatrix (HK) Ltd., which oversees $32 million. “I doubt the practicality of getting international cooperation on something like this,” he said.

Ohmae compared the current financial crisis with Japan’s 15- year economic decline that began in 1989. Both started with a property bubble, which wiped out companies’ equity when it burst, and like in Japan, the current one could lead to escalating bankruptcies as banks worried about their own survival rein in lending, he said.

The financial-market upheaval may lead to slower growth in China and the reversal of the commodity boom as ship orders are canceled and steel supply dumped, said Ohmae. What Ohmae called Japan’s “Viagra” economy and Australia’s “dig and deliver” boom may also fizzle as China weakens, he said.

“He wants to fix problems one by one as if he were still the chief executive officer of Goldman Sachs,” he said. “He has to take his CEO hat completely off and come up with a systemic solution as opposed to a one-by-one solution.”

To contact the reporter on this story: Bei Hu in Hong Kong at bhu5@bloomberg.net