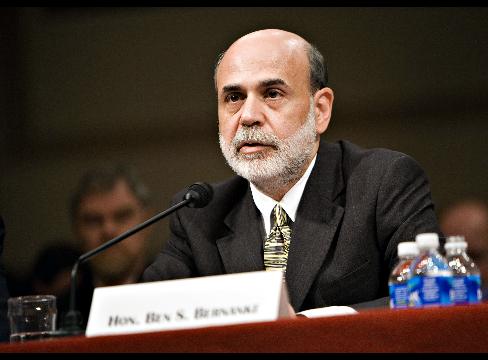 Bernanke’s remarks, an unusual departure from his prepared testimony, come as lawmakers and the Bush administration negotiate a rescue plan aimed at easing the worst financial crisis since the Great Depression. The Fed chief said paying prices higher than the bad assets would fetch in the open market would help “unfreeze” credit markets and aid the economy.

Analysts said Bernanke is essentially advocating that government use a pricing model that assumes that the debt will be paid in full over a long period of time. That is different from the mark-to-market model used by investment banks that prices assets at what they are worth on a given day.

The risk is that the model does not provide transparent pricing of the assets taxpayers are taking on, said Ann Rutledge, partner at R&R Consulting in New York, a firm that specializes in structured finance. Many of the securities “are not going to pay at maturity,” Rutledge said.

Nearly one in 10 mortgage loans are in default or delinquency and house prices have fallen for eight consecutive quarters, according to the S&P Case-Shiller Index. Paulson and Bernanke are betting that the asset purchases will free up lending and break a self-perpetuating cycle of tight credit leading to lower home prices and more defaults.

“Under the Treasury program, auctions and other mechanisms could be designed that will give the market good information on what the hold-to-maturity price is for a large class of mortgage-related assets,” Bernanke said. There are “substantial benefits” to buying assets at a cost close to the “hold-to-maturity” price, he said.

Treasury Secretary Henry Paulson, who with Bernanke urged lawmakers to act on the plan quickly to address investor concerns at the deepening crisis, said the “major focus” of debt purchases would be mortgage-linked assets.

Paulson rejected an idea floated by Democratic Senator Sherrod Brown of Ohio for banks to retain some portion of the asset they sell to the Treasury.

“I don’t think that that would be a successful way to deal with something systemically,” Paulson said at the hearing.

Bernanke opposed efforts by banks to lobby regulators to remove mark-to-market pricing in their portfolios. A suspension of such accounting would hurt investor confidence, he said.

Anne Canfield, executive vice president at the Consumer Mortgage Coalition, an industry group representing mortgage lenders and loan-servicing companies, sent a letter to Treasury officials yesterday evening saying the bailout plan “will only be successful if it leads to substantially higher prices” for mortgage assets, according to a copy obtained by Bloomberg News.

“In past bailouts (Brady bonds, etc.), discounted Treasuries (zero-coupon bonds) have been used to create the perception that principal would be fully repaid,” Canfield said in a letter to Acting Treasury Undersecretary Anthony Ryan and David Nason, an assistant Treasury secretary. “Under mark-to- market rules it is more difficult to create such perception.”

Merrill Lynch & Co. in July sold more than half of its mortgage-linked collateralized debt obligations for about a fifth of their original price, setting a price for those securities at that time.

Bernanke’s remarks today indicate he favors paying above the market rate. “We cannot impose punitive measures on the institutions that choose to sell assets,” the Fed chief said today. “That would eliminate or strongly reduce participation and cause the program to fail.”

The pricing method Bernanke is advocating would also provide a political shield, analysts said. Congress wouldn’t be able to see if prices fell during a quarter, nor would they be able to push the Treasury to sell if they saw the value of the securities rise. That would also protect the market from the sense of an overhang if in fact the government did acquire a $700 billion pool of mortgage-related assets.

“The plan allows you to hold the assets off the market,” says Bradley Hintz, former chief financial officer at Lehman Brothers Holdings Inc. and now an analyst at Sanford C. Bernstein & Co. Inc. It treats the Treasury as “an investor with a perpetual life span, an infinite amount of money, and no commercial interests.”

To contact the reporters on this story: Craig Torres in Washington at ctorres3@bloomberg.net; Kathleen Hays in New York at khays$@bloomberg.net