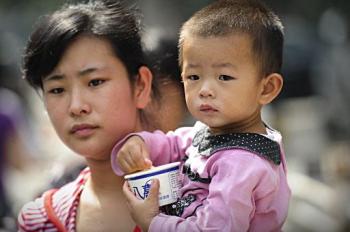 Meanwhile, the head of China’s product-quality agency, Li Changjiang, stepped down under pressure Monday, becoming the highest-level leader to be embroiled in the scandal that has left China’s dairy industry reeling.

Li had overseen the ministry-level product-quality agency during a wave of scandals that have tarnished China’s manufacturing reputation.

Also sacked was Wu Xianguo, the top official of Shijiazhuang city, where tainted milk powder first surfaced in the Sanlu brand headquartered in the city, the Xinhua news agency said.

Eighteen people have been arrested, including the head of the Sanlu Group, while dozens have been detained for questioning, state media have said.

More than 80 percent of affected children are aged under two, the Chinese health ministry said.

The melamine scandal came to light two weeks ago in state-controlled media, but some press reports say the scam had been going on for years.

Despite a test in June determining that its products were contaminated with melamine, normally used in making plastics, the firm withheld the information from local government until August 2, Xinhua added.

Up to four infants have died in the scandal, which prompted countries to ban or limit Chinese dairy imports.

Joining a clutch of other countries, Taiwan said it was banning all Chinese milk products with immediate notice, as well as non-dairy products after melamine was found in an imported Chinese non-dairy creamer.

“There is no timeframe for the ban,” said Wang Chih-chao, an official with the Department of Health.

Meanwhile retailers in Hong Kong said they were pulling more milk products off their shelves after samples tested positive for melamine.

Melamine was first found in infant milk formula in Chinese markets but has since been detected in a range of products with dairy ingredients both in China and abroad.

The discovery has led to mass recalls and a Chinese government campaign to tighten quality inspections across the dairy sector.

Three children have died and 104 are still in serious condition, the health ministry said, with symptoms including kidney stones.

A fourth child was also reported dead by authorities in Xinjiang province but has not been added to the national figure.

The scandal stems from the practice of adding melamine to watered-down milk to give it the appearance of higher protein levels.

A host of countries — Bangladesh, Brunei, Burundi, Japan, Gabon, Malaysia, Myanmar, Singapore and Tanzania — have barred Chinese milk products or taken some other form of action to curb consumption.

Hong Kong’s government said a three-year-old girl developed a kidney stone after drinking the tainted milk — believed to be the first such case outside mainland China.

The girl has since left hospital and is in good condition, it added.

The Centre for Food Safety, a Hong Kong government body, said it had found melamine in a Nestle Dairy Farm pure milk sample from northeastern China.

Swiss food giant Nestle said it was “confident” its products in China were safe and that none had been adulterated with melamine.

Singapore has also found melamine in a Chinese-made milk candy, officials there said, while across China, supermarkets and shops have been pulling milk and a wide range of other dairy products off their shelves.

China has been hit by a wave of embarrassing scandals in recent years over dangerous products including food, drugs and toys, spoiling its manufacturing reputation.

Melamine was found in pet food containing Chinese ingredients that killed cats and dogs in the United States last year.