“…the VA estimates that 18 veterans a day — or 6,500 a year — take their own lives, but that number includes vets from all wars.” Source: Military suicide rate increased again 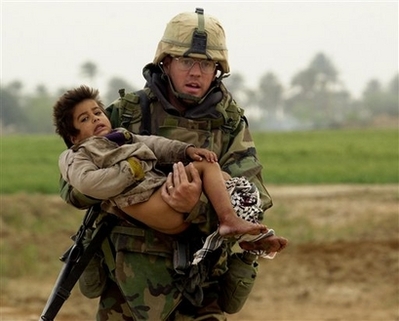 Pfc. Joseph Dwyer, 26, from Mt. Sinai, N.Y., carries a young Iraqi boy who was injured during a heavy battle between the U.S. Army’s 7th Cavalry Regiment and Iraqi forces in this March 25, 2003 file photo near Al Faysaliyah, Iraq. Dwyer died of an accidental overdose after struggling with post-traumatic stress disorder for almost five years.

WASHINGTON – More than 22,000 veterans have sought help from a special suicide hot line in its first year, and 1,221 suicides have been averted, the government says.

According to a recent RAND Corp. study, roughly one in five soldiers returning from Iraq and Afghanistan displays symptoms of post-traumatic stress disorder, putting them at a higher risk for suicide. Researchers at Portland State University found that male veterans are twice as likely to commit suicide than men who are not veterans.

This month, a former Army medic, Joseph Dwyer, who was shown in a Military Times photograph running through a battle zone carrying an Iraqi boy, died of an accidental overdose after struggling with post-traumatic stress disorder for almost five years.

Janet Kemp, national suicide prevention coordinator for the Veterans Affairs Department, said the hot line is in place to help prevent deaths such as Dwyer’s. “We just want them to know there’s other options and people do care about them, and we can help them make a difference in their lives,” she said in an interview.

The VA teamed up with the Substance Abuse and Mental Health Services Administration to launch the hot line last July after years of criticism that the VA wasn’t doing enough to help wounded soldiers returning from Iraq and Afghanistan. In April, two veterans groups sued the VA, citing long delays for processing applications and other problems in treatment for veterans at risk for suicide. The department has spent $2.9 million on the hot line thus far.

The hot line receives up to 250 calls per day – double the average number calling when it began. Kemp said callers are divided evenly between veterans from the Iraq, Afghanistan and Vietnam wars. Richard McKeon, public health adviser for SAMHSA, said 10 to 20 of the 1,575 calls received each week have to be rerouted to high-volume backup call centers throughout the country.

The VA estimates that every year 6,500 veterans take their own lives. The mental health director for the VA, Ira Katz, said in an e-mail last December that of the 18 veterans who commit suicide each day, four to five of them are under VA care, and 12,000 veterans under VA care are attempting suicide each year.

This month, the hot line began an advertising campaign in Washington area subway stations and buses featuring the slogan, “It takes the courage and strength of a warrior to ask for help.”

The veterans hot line, which is linked to the National Suicide Prevention Lifeline, received 55,000 callers in its first year, including both veterans and people who are concerned about them, according to figures being released Monday. One-third of the 40 specially trained counselors are veterans themselves.

“We try to get them (callers) to talk about their situation and what they remember and see if they can identify exactly what their issues are. I think there’s a comfort in knowing that they can get some help from people who do understand what combat stress is like,” Kemp said.

From the call center, counselors instantly can check a veteran’s medical records and then connect the caller to local VA suicide prevention coordinators for follow-up, monitoring and care at local VA medical centers. Kemp said that since the hot line started, 106 veterans have been steered to free medical care from the VA.

Kemp said the hot line was put in place specifically for those veterans who don’t get enough help until it’s too late. “They have indicated to us that they are in extreme danger, either they have guns in their hand or they’re standing on a bridge, or they’ve already swallowed pills,” she said. Kemp said 1,221 veterans who were in such situations were rescued during the hot line’s first year.

The VA is preparing for the eventual return of a large number of troops from Iraq and Afghanistan. This could put added stress on the mental health screening program for returning veterans, which could lead to a rise in undiagnosed mental health issues. The VA recently got enough money to double its suicide prevention staff and is planning to hire 212 more people soon.

The National Suicide Prevention Lifeline is available 24 hours a day by calling 800-273-TALK (8255); veterans should press “1” after being connected.