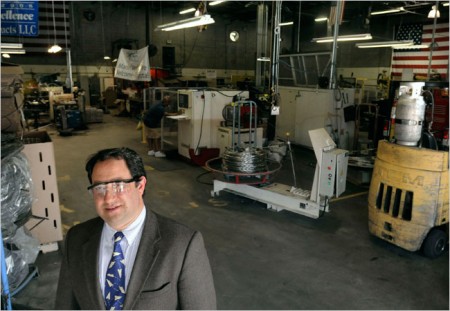 Drew Greenblatt of Marlin Steel Wire Products is having trouble getting a $300,000 loan to buy a robot for his Baltimore factory. “This is what a bank is supposed to do,” he said.

Banks struggling to recover from multibillion-dollar losses on real estate are curtailing loans to American businesses, depriving even healthy companies of money for expansion and hiring.

Two vital forms of credit used by companies – commercial and industrial loans from banks, and short-term “commercial paper” not backed by collateral – collectively dropped almost 3 percent over the last year, to $3.27 trillion from $3.36 trillion, according to Federal Reserve data. That is the largest annual decline since the credit tightening that began with the last recession, in 2001.

The scarcity of credit has intensified the strains on the economy by withholding capital from many companies, just as joblessness grows and consumers pull back from spending in the face of high gas prices, plummeting home values and mounting debt.

“The second half of the year is shot,” said Michael T. Darda, chief economist at the trading firm MKM Partners in Greenwich, Conn., who was until recently optimistic that the economy would continue expanding. “Access to capital and credit is essential to growth. If that access is restrained or blocked, the economic system takes a hit.”

Companies that rely on credit are now delaying and canceling expansion plans as they struggle to secure finance. 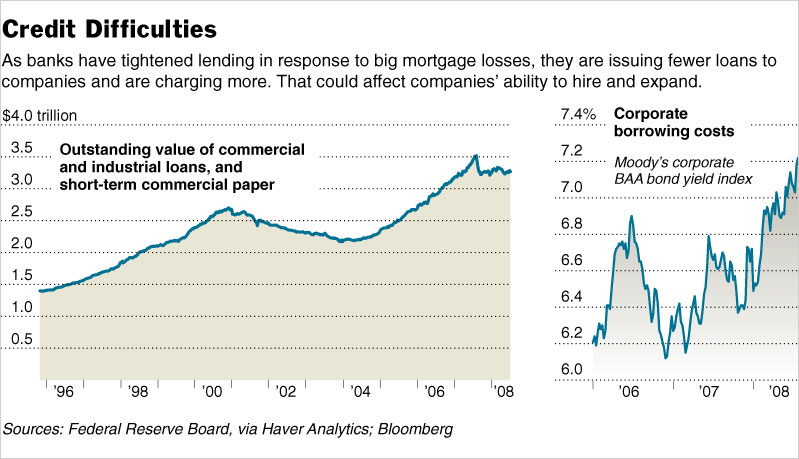 Drew Greenblatt, president of Marlin Steel Wire Products, figured it would be easy to get a $300,000 bank loan to finance a new robot for his factory in Baltimore. His company, which makes parts for makers of home appliances, is growing and profitable, he said. His expansion would add three new jobs to an economy hungry for work.

But when Mr. Greenblatt called the local branch of Wachovia – the same bank that had been aggressively marketing loans to him for years – he was distressed by the response.

“The exact words were, ‘We’re saying no to almost everybody,’ ” Mr. Greenblatt recalled. “This is why God made banks, for this kind of transaction. This is going to slow down the American economy.”

Earlier this year, credit extended by banks to companies and consumers was still growing at double-digit rates compared with three months earlier, according to an analysis of Federal Reserve data by Goldman Sachs. By mid-June, bank credit was declining at an annualized pace of more than 6 percent.

That is a drop of nearly $150 billion, an amount much larger than the value of the tax rebates the government has sent to households this year in an effort to spur economic activity.

Financial industry executives say tighter credit from major banks represents a swing back to a realistic assessment of risk, after years of handing out money with abandon. Those practices produced a mortgage crisis whose losses could reach $1 trillion, by many estimates.

“Before, they wouldn’t verify income and they were loose on the valuations of collateral,” said John W. Kiefer, chief executive of First Capital, a private commercial lender. “Now they’re tightening down on the ability to repay. They go off the reservation, and now they come back to basics. It’s preservation for many of them at this point. It’s survival.”

But if the newfound caution of American banks is prudent in the long run, the immediate impact is amplifying the troubles with the economy. The Federal Reserve has been lowering interest rates aggressively to make money flow more loosely and to spur economic activity.

The financial system is not going along: As banks hold on to their dollars, mortgage rates are climbing. So are borrowing costs for corporations.

Some suggest that the banks, spooked by enormous losses, have replaced a disastrously indiscriminate willingness to hand out money with an equally arbitrary aversion to lend – even on industries that continue to grow.

“There’s been a lot of disruption in the credit market, and a lot of traditional lenders have really tightened up,” said Gregory Goldstein, president of Macquarie Equipment Finance, which leases computer gear and other technology to companies. “Before, some of the standards they lent on were weak, but we think they have overshot and gone too far on the other end.”

Such was Mr. Greenblatt’s reaction, as he learned that an infusion of credit for his Baltimore factory would not come easily. His company has been enjoying double-digit sales growth. This month, it received the two largest orders in its history, he said.

“It was jubilation,” he said. “I was doing the Funky Chicken.”

The initial call to Wachovia left him dismayed.

“I’m stunned,” Mr. Greenblatt said. “God is smiling on this factory. We’re at such an exciting inflection point, and this is what a bank is supposed to do. There’s sand in the gears.”

No loan meant one fewer order for the factory in Chicago that makes the robot Mr. Greenblatt wants to buy, and fewer hours for workers there. It meant less business for the truck driver who would have hauled the robot to Baltimore, and no help-wanted ads for Marlin Steel Wire Products.

Mr. Greenblatt eventually got oral approval for the loan, though after more than a week. He was still waiting for the money at the end of last week.

Wachovia, which lost $8.9 billion in the second quarter, declined to discuss the loan. But the bank confirmed that it has been reducing its lending in troubled areas of the economy.

“We’ve got industries that we consider to be stressed industries, and we’re looking at those a lot harder,” said Carlos Evans, a wholesale banking executive for Wachovia, listing as examples housing construction, building products and distributors for those goods. “Our loan growth slowing is more indicative of the economy than anything else.”

Still, Wachovia’s commercial and industrial loans grew by 13 percent in June compared with the prior year, Mr. Evans said.

But recent signs suggest that tight lending is spilling from housing into other areas of the business world. Companies with solid credit and profitable businesses can generally still get loans, but rates are higher and wait times are longer.

According to a survey of senior loan officers conducted by the Federal Reserve in April, 55 percent of American banks tightened lending requirements for commercial and industrial loans to large and midsize companies – up from about 30 percent in the previous survey, in January. About 70 percent of the respondents said they have made such loans more expensive.

“Banks will be much more cautious and keep raising the bar, and that will lead to an outright decline in total commercial and industrial loans,” predicted Stuart G. Hoffman, chief economist at the PNC Financial Services Group in Pittsburgh. “Banks clearly have to rebuild their capital base. They’re going to look a bit more nervously before they make those loans.”

Until last summer, banks lent freely, banking experts say, because they sold most of the loans they issued, making them less concerned about whether the customer could handle the payments: If the loan went bad, that was someone else’s problem.

But in the wake of the mortgage crisis, that system has all but shut down. Banks are now stuck with the loans they extend, making them more motivated to scrutinize their customers, particularly younger and smaller businesses.

“It’s the small business guy who creates most of the jobs,” said Mr. Kiefer, the First Capital chief executive. “If they can’t borrow to employ people, then we’ve got a mess on our hands.”

For the last six months, Saul Epstein has been trying in vain to get a $2 million line of credit for his company, Global Harness Systems. The company, based in Bala Cynwyd, Pa., has a factory in Mexico, where it makes parts for engines. The factory gets paid for its wares weeks after they have shipped, necessitating credit to finance the upfront costs of production – raw materials, labor and transportation.

Mr. Epstein figured that getting a loan would be easy. Since he became chief executive last year, Global Harness has gone from break-even to profitable. Sales should reach $20 million this year, up from $17 million last year, he said. But in this new era of caution, banks are focused on the fact that Global Harness lost money in 2005.

“They keep saying, the way the times are, we need a longer track record,” Mr. Epstein said.

Mr. Epstein, forced to limit his production to what he can finance with his existing cash flow supplemented by his own money, has been tightening credit himself: He has been turning down orders from companies with any whiff of financial troubles, lest his company fail to get paid.

“The same way the bank is hesitant to lend to me, you’re concerned about taking on a customer that might go into bankruptcy,” he said.

George Rosero, president and chief executive of Atlanta Pediatric Therapy, has been trying for more than a month to increase his roughly $500,000 credit line to about $1 million.

His company, profitable for the last two years, offers therapy to children with speech and physical impediments, he said. Mr. Rosero aims to expand by adding four sales people. He wants to buy new software to better manage communications with patients and hire a consultant to improve the work environment.

All of that is on hold.

“Three or four years ago, I could just make a phone call and get an increase,” Mr. Rosero said. “Now, they’re asking me for a lot more information.”