In a victory for tyranny and injustice, a federal appeals court ruled the president has the power to arrest American citizens and imprison them indefinitely without charging them – at whim. 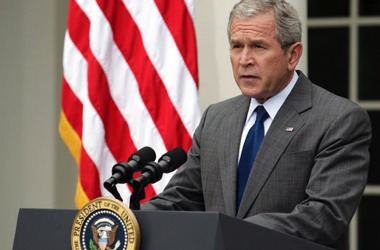 Judges of the U.S. Fourth Circuit Court of Appeals in Richmond, Virginia, in a 5-4 decision, ruled that the president can legally, by simply labeling an individual an “enemy combatant,” imprison anyone, citizen or not, without due process for months, years, decades – or indefinitely.

The Fourth Circuit Court of Appeals reversed an earlier three-judge panel’s decision which ruled that the government lacked the power to detain Ali al-Marri, a citizen of Qatar legally in the United States on a student visa, who had been charged with credit card fraud and making false statements as part of the 9/11 investigation. Keep in mind the Bush administration is not accusing al-Marri of having any connections to al-Qaeda or the Taliban or fighting against U.S. forces. He is accused of being involved in an unproven terrorist plot, which he denies.

That didn’t stop the judge who was the swing vote in the matter, William Traxler, from opinionating in the ruling (page 28):

As pointed out by my colleagues, the Constitution generally affords all persons detained by the government the right to be charged and tried in a criminal proceeding for suspected wrongdoing, and it prohibits the government from subjecting individuals arrested inside the United States to military detention unless they fall within certain narrow exceptions. See United States v. Salerno, 481 U.S. 739, 755 (1978) (“In our society liberty is the norm, and detention prior to trial or without trial is the carefully limited exception.”) The detention of enemy combatants during military hostilities, however, is such an exception. If properly designated an enemy combatant pursuant to legal authority of the President, such persons may be detained without charge or criminal proceedings “for the duration of the relevant hostilities.” Hamdi v. Rumsfeld, 542 U.S. 507, 519-521 (2004).

Judge Traxler’s attitude toward vesting the president with extensive tyrannical powers is astounding as is his understanding and interpretation of the law. He continued with an even scarier statement [Dec. at 62]:

The President has cautioned us that “[t]he war on terror we fight today is a generational struggle that will continue long after you and I have turned our duties over to others.” -Pres. George W. Bush, State of the Union Address (Jan. 23, 2007). Unlike detention for the duration of a traditional armed conflict between nations, detention for the length of a “war on terror” has no bounds.

Under the current state of our precedents, it is likely that the constitutional rights our court determines exist, or do not exist, for al-Marri will apply equally to our own citizens under like circumstances. This means simply that protections we declare to be unavailable under the Constitution to al-Marri might likewise be unavailable to American citizens, and those rights which protect him will protect us as well.

The Fourth Circuit Court of Appeals is therefore advocating a circumvention of basic constitutional rights by the president of the United States and the courts. And this power, once invested will carry forward to all subsequent presidents and courts. They have determined that they will be the “deciders,” specifying who will and who will not be afforded due process under constitutional law.

Glenn Greenwald of Salon has a great analysis of the case and says it better than anyone:

At least with regard to individuals detained on U.S. soil, the Bush administration has exercised these definitively tyrannical powers in only a handful of cases — two U.S. citizens (Hamdi and Padilla) and one non-citizen in the U.S. legally (al-Marri). But what the administration has done is asserted those powers generally, and embarked upon a strategy to ensure that they are institutionalized. Yesterday’s ruling — likely (though not certain) to be reviewed by the U.S. Supreme Court — is but another step down the path of un-American radicalism we’ve been traversing.

Greenwald points out our Founding Fathers warned against investing a president with such powers: “The very core of liberty secured by our Anglo-Saxon system of separated powers has been freedom from indefinite imprisonment at the will of the Executive,” something they were only too familiar with.

“George Bush will likely leave office with this particular tyrannical power infrequently exercised but nonetheless vigorously asserted, defended, and close to established,” Greenwald says. “This is yet another step in the creeping extremism of the last seven years – like torture and warrantless eavesdropping, this power (allowing the President to imprison U.S. citizens in military brigs with no charges) is one that was until quite recently inconceivable, but is now a defining part of how our Government operates.”

The mournful tolling of a funeral bell can already be heard as it sounds the approaching death of freedom — that is unless the American people demand that Congress reign in the creeping totalitarianism that is rapidly destroying our once free republic.