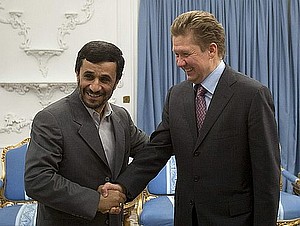 Gazprom has signed a memorandum on cooperation in production and transportation of oil and natural gas with the National Iranian Oil Co. The Iranian company, which all other oil companies in the world refuse to work with, is promising Gazprom “a full package of projects.” The memorandum was signed by Gazprom CEO Alexey Miller, Iranian Oil Minister Gholam Hossein Nozari and NIOC managing director Seifollah Jashnsaz. Gazprom will thus have the chance to strengthen its position in the countries with the world’s second largest gas reserves (proven reserves of 28.13 trillion cu. m.).

The memorandum envisages the formation of a joint venture to implement geological exploration and development projects, construction of refineries and transportation of Iranian gas. Nozari also mentioned transportation of oil from the Caspian Sea to the Gulf of Oman to the Iranian official IRNA information agency. A Gazprom sources also says that an Iran-Pakistan-India gas pipeline has been discussed.

Deliveries of Russian gas to northern regions of Iran on a long-term basis are also being discussed. Gazprom plans to deliver the gas in exchange for shipping oil by tanker or delivery of gas to the Turkish border. The construction of a gas distribution network is also under discussion. It would connect the industrialized north of Iran with the gas-rich south of the country. Northern Iran is now dependent on gas supplied from Turkmenistan, which turned off the gas just before New Year, leaving the Iranian region without fuel.