Iran has no interest whatsoever to attack anyone, BUT Iran will defend itself.
– Iran does not intend to wipe out Israel, says Ahmadinejad
– Ron Paul: Iranians Tested Missiles AFTER Israel had WAR GAMES

Iran has done nothing wrong. Iran is strictly obeying international law.
An attack on Iran would be illegal, since under the Nuclear Non-Proliferation Treaty, Iran has the right to enrich uranium for peaceful purposes and that is “perfectly legal”!
– Ron Paul on Iran and Energy June 26, 2008

It is Israel and the U.S. – not Iran – that are the aggressors and preparing for an attack:
– Ex-weapons inspector says Iran not pursuing nukes, but U.S. will attack before ‘09
– President George W Bush backs Israeli plan for strike on Iran
– Ron Paul: I hear members of Congress saying “if we could only nuke Iran”
– Ron Paul: Nancy Pelosi pulled Iran bill on orders of Israel
– Israel hints at readiness to strike Iran
– US backs Jundullah to destabilize Iran
– How Israel Is creating the war on Iran
– U.S. escalating covert operations against Iran: report
– Senate report exposes key role of the Israel lobby in fomenting war with Iran
– Top US commander briefed on IDF’s four-front strategy in potential Iran war context
– US: Oil blockade constitutes an act of war
– Israel Prodding U.S. To Attack Iran
– Israel launches ‘Iran Command’ for war
– Israel to attack Iran unless enrichment stops: minister
– Oil hits new high as Israel calls strike on Iran ‘unavoidable’
– Joschka Fischer: US, Israel will attack Iran
– And the winner is … the Israel lobby
– Bush ‘plans Iran air strike by August’
– U.S. Will Attack Iran
– Israel will not tolerate nuclear Iran: Olmert
– Israel preparing to bomb Iran N-sites
– Joint Chiefs of Staff: US prepping military options against Iran

Are “they” preparing the public, in the article below “IRAN READY TO HIT UK”, for another false flag attack like 9/11?
– Loose Change Final Cut
– 9/11 False Flag
Former Governor Jesse Ventura warns that they might use such a false flag attack as an excuse to attack Iran:
– Former Governor: “Absolutely” danger of false flag as pretext to attack Iran
And this time it is Iran who is “with the terrorists” and has the weapons of mass destruction and all of that.

Will it be easy to win this war?
– America Is the Rogue Nation

And why are they doing this? Just because of oil?
– Iran dumps U.S. dollars in oil transactions
– Ahmadinejad to OPEC: Dump weak dollar
– How Iran Has Bush Over a Barrel

No, it is not only about oil, it’s about something far worse.
Ask yourself what will happen, if Israel and/or the U.S. attack Iran?
What will such an attack cause?
If your answer would be something like:

“That can’t be!” or “They would not do that intentionally, would they?”

Then you are right on.
And then you have the reason, why they are really doing it.
If I would have told you this straightaway, you would probably have called this a conspiracy theory and you would have dismissed it. More on what is going on under World Situation (2.Politics). 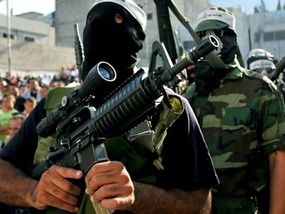 IRAN is poised to launch terror attacks in Britain if the West presses ahead with military strikes against its nuclear facilities, intelligence experts warned last night.

As tensions in the Middle East continued to grow, they warned that the Iranian-backed terrorist group Hezbollah had already established sleeper cells in Britain and mainland Europe tasked with carrying out bloody reprisals.

Richard Kemp, former adviser on terrorism to Tony Blair, said the difficulty of attacking Western and Israeli military targets directly meant Iran was likely to use its terror network to retaliate. Hezbollah, formed in Lebanon in the 1980s, has grown to become a major force in the Middle East.

He said: “In my view Iran’s only realistic method of retaliation is through Hezbollah.

“Hezbollah undoubtedly have the capability to carry out attacks against Western targets outside the region. They have people here in the UK and they would aim to carry out attacks if they saw us as being in any way supportive of an attack on Iran’s nuclear facilities.”

Claude Moniquet, director of the European Strategic Intelligence and Security Centre, said: “Intelli-gence services across Europe believe Hezbollah pose a serious threat. They have already put in place a network of operatives and there is some evidence that reconnaisance has been carried out on potential targets.

“They are in wait-and-see mode at the moment and no-one knows exactly what they will do, but there is little doubt they will retaliate if Iran is attacked.”

The warnings come amid mounting speculation that either Israel or the United States may attack Iran’s nuclear facilities from the air. And tension mounted last week when, in a show of strength, Iran test-fired nine long-range ballistic missiles capable of hitting targets in Israel and coalition bases in Iraq.

In America Republican hawks suggest there is a “window of opportunity” for an attack after the US elections in November, before a new President is sworn in on 20 January next year.

But Sir Richard Dalton, British ambassador to Iran until 2006, insists there are still huge political, legal and military barriers to any attack.

Sir Richard, now an adviser to the think tank Chatham House, said the prospects had not changed, despite Iran’s missile launches and despite the major Israeli exercise last month which was widely seen as a rehearsal for air strikes on Iran.

Tomorrow the Government will ask MPs to approve adding Hezbollah – which attacked Israel with rockets in 2006 provoking an Israeli invasion of Lebanon – to a list of terrorist groups banned in the UK.

He added: “I consider it a natural decision to be issued by a founding bloc of the Zionist entity.”