Brothers that live when we are dead,
don’t set yourself against us too.
If you could pity us instead,
then God may sooner pity you.
We five or six strung up to view,
dangling the flesh we fed so well,
are eaten piecemeal, rot and smell.
We bones in a fine dust shall fall.
No one make that a laugh to tell:
pray God may save us one and all.

The United States is operating “floating prisons” to house those arrested in its war on terror, according to human rights lawyers, who claim there has been an attempt to conceal the numbers and whereabouts of detainees.

Details of ships where detainees have been held and sites allegedly being used in countries across the world have been compiled as the debate over detention without trial intensifies on both sides of the Atlantic. The US government has been urged to list the names and whereabouts of all those detained. 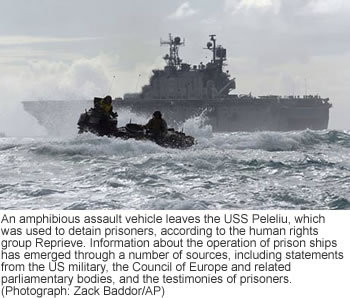 Since 2006, when Stephen Gray’s revelations of Ghost Planes confirmed the suspicions of human rights activists, we have known that our government kidnaps and tortures “suspicious” individuals as a matter of routine. Extraordinary rendition is the NewSpeak term used when this practice is denied. The denials and non-denials have become a mockery, a stain on the soul of America, when the truth is brought to light by an individual such as Maher Arar, who lived to bear witness.

And then they would take me back to the interrogation room. Again another set of questions, and the beating starts again and again. On the third day the beating was the worst. They beat me a lot with the cable. And they wanted me to confess that I have been to Afghanistan. This was a big surprise to me because even the Americans who interviewed me, the FBI officials who interviewed me, did not ask me that question. I ended up falsely confessing in order to stop the torture. The torture decreased in intensity.From that moment on they rarely used the cable. Mostly they slapped me on the face, they kicked me, they humiliated me all the time.

The first 10 days of my stay in Syria was extremely harsh and during that period I found my cell to be a refuge. I didn’t want to see their faces. But later on living in that cell was horrible. And just to give you an idea about how painful it is to stay in that place–I was ready after a couple of months, I was ready to sign any piece of document for me, not to be released, just to go to another place where it is fit for human being.

Proof of kidnapping and torture of so-called suspicious persons? Highly inconvenient for the Torture Administration. They may have started the ghost ships before, but certainly, they have used them extensively as an alternative to air torture and rendition — and as a matter of expedience.

Brothers, if that’s the word we said,
it’s no disparagement to you
although in justice we hang dead.
Yet all the same you know how few
are men of sense in all they do.
Pray now we’re dead that Jesus well
of grace shall not run dry nor Hell
open in thunder as we fall.
We’re dead don’t harry us as well:
pray God may save us one and all.

Clive Stafford Smith, Reprieve’s legal director, said: “They choose ships to try to keep their misconduct as far as possible from the prying eyes of the media and lawyers. We will eventually reunite these ghost prisoners with their legal rights.”By its own admission, the US government is currently detaining at least 26,000 people without trial in secret prisons, and information suggests up to 80,000 have been ‘through the system’ since 2001. The US government must show a commitment to rights and basic humanity by immediately revealing who these people are, where they are, and what has been done to them.”

Showered and rinsed with rain, we dead
the sun has dried out black and blue.
Magpie and crow gouge out each head
for eyes and pluck the hair. On view,
never at rest a moment of two,
winds blow us here or there a spell;
more pricked than a tailor’s thumb could tell
we’re needled by the birds. Don’t fall
then for our brotherhood and cell:
pray God may save us one and all.

Details of ships where detainees have been held and sites allegedly being used in countries across the world have been compiled as the debate over detention without trial intensifies on both sides of the Atlantic. The US government was yesterday urged to list the names and whereabouts of all those detained.Information about the operation of prison ships has emerged through a number of sources, including statements from the US military, the Council of Europe and related parliamentary bodies, and the testimonies of prisoners.

The analysis, due to be published this year by the human rights organisation Reprieve, also claims there have been more than 200 new cases of rendition since 2006, when President George Bush declared that the practice had stopped. Guardian UK

According to research carried out by Reprieve, the US may have used as many as 17 ships as “floating prisons” since 2001. Detainees are interrogated aboard the vessels and then rendered to other, often undisclosed, locations, it is claimed.

Ships that are understood to have held prisoners include the USS Bataan and USS Peleliu. A further 15 ships are suspected of having operated around the British territory of Diego Garcia in the Indian Ocean, which has been used as a military base by the UK and the Americans.

At this time many people were abducted by Somali, Kenyan and Ethiopian forces in a systematic operation involving regular interrogations by individuals believed to be members of the FBI and CIA. Ultimately more than 100 individuals were “disappeared” to prisons in locations including Kenya, Somalia, Ethiopia, Djibouti and Guantánamo Bay.

Reprieve believes prisoners may have also been held for interrogation on the USS Ashland and other ships in the Gulf of Aden during this time.

The Reprieve study includes the account of a prisoner released from Guantánamo Bay, who described a fellow inmate’s story of detention on an amphibious assault ship. “One of my fellow prisoners in Guantánamo was at sea on an American ship with about 50 others before coming to Guantánamo … he was in the cage next to me. He told me that there were about 50 other people on the ship. They were all closed off in the bottom of the ship. The prisoner commented to me that it was like something you see on TV. The people held on the ship were beaten even more severely than in Guantánamo.” Reprive

This is your government.

This is your government cracked on power and greed and brutality.