Of course John McCain wants more military, it’s the only thing he knows about. – The Infinite Unknown 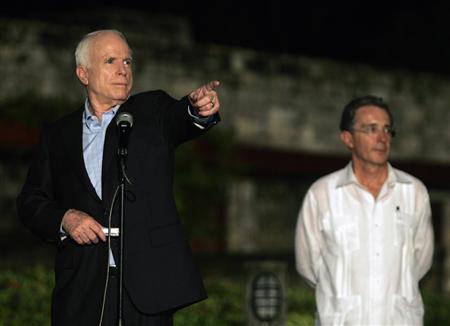 WASHINGTON (Reuters) – Republican presidential candidate John McCain wants the U.S. military to be much larger than current expansion plans envision, an adviser to the Arizona senator said this week.

The Bush administration has begun expanding the U.S. Army and Marine Corps to create a combined strength of around 750,000 active duty troops — a process backed by McCain’s Democratic rival, Sen. Barack Obama of Illinois.

But McCain believes an Army and Marine Corps with a combined strength of up to 900,000 troops is necessary, said Randy Scheunemann, an adviser to the candidate on foreign policy and national security.

“Sen. McCain feels the proposed increases are not sufficient. They need to be more, to fully address the challenges we face in the 21st century,” Scheunemann told Reuters in a telephone interview.

The U.S. Army and Marines have been severely strained by the wars in Iraq and Afghanistan. Many troops have served multiple tours in the war zones and currently spend only 12 months at home before they deploy again for another year.

As a member of the U.S. Senate’s armed services committee, McCain has built a reputation for scrutinizing the costs of big weapons programs and he has pledged to pursue that approach in the White House if he wins November’s election.

McCain led an investigation in 2003 that killed a $23.5 billion Air Force plan to lease and buy Boeing Co refueling planes. The probe sent two former Boeing executives to jail and led to the resignation of Boeing’s chief executive and two Air Force officials.

Scheunemann said McCain wanted exhaustive reforms “in the way the Pentagon buys its weapons systems to make sure that we get the best weapons for the men and women in uniform and also get the best value for the taxpayer.”

“There may be cost savings but in terms of the top line (he’s) not anticipating reductions,” Scheunemann said in the interview, conducted on Tuesday.

President George W. Bush has submitted a budget of more than $500 billion for the Pentagon for the next fiscal year, which begins in October. The wars in Iraq and Afghanistan cost some $160 billion a year on top of that.

Iraq is the source of one of the biggest disputes between Obama and McCain, who backs the current course of leaving troop cuts generally in the hands of military commanders.

Obama has said he wants all U.S. combat brigades out of Iraq 16 months after he takes office — although his advisers have indicated some flexibility, saying he will seek the advice of his commanders and leave a “residual force” in place.

The United States has around 145,000 troops in Iraq and some 32,000 in Afghanistan, according to the Pentagon.

Obama has pledged to send two more combat brigades — between 6,000 and 10,000 soldiers — to fight rising insurgent violence in Afghanistan.

Democrats say Bush has neglected the war in Afghanistan to focus on Iraq while McCain backs Bush’s view that Iraq is the central front in America’s fight against Islamist militants.

“There are problems in our unity of effort, in our command structures, in the coordination between the civilian and military side as well as some shortcomings on the Afghan government side, particularly corruption and rule of law,” he said.