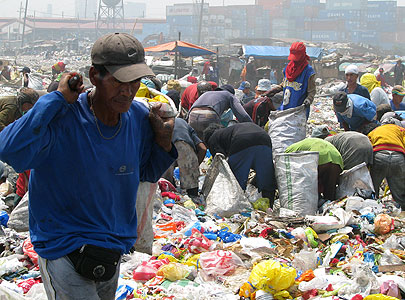 MANILA – Amid the sprawl and stench of this city’s main dump – its air thick with charcoal and fleas – Redentor Escarcha is beaming.

The sinewy 26-year-old, his skin glistening with sweat, is one of thousands who come here every day to mine the Philippines’ capital’s garbage for recyclables: cans, cardboard, copper cables, anything of value.

He knows the precise value of everything here – and he should. Escarcha is a veteran who has worked this dump for 19 years, ever since he was 7 years old.

He was born here.

“I was just lucky,” he says, explaining how he hit upon a treasure trove of high-quality glass this particular morning.

Yes. In Escarcha’s value system, today is another day he’ll be able to feed his family.

Here in “Smokey Mountain,” as this dump is known, poverty runs about as deep as it can get.

And every day legions of its inhabitants swarm into its steaming refuse, wooden-handled picks in hand, to silently root out nuggets of value.

“These are the poorest of the poor,” says Jane Walker, who heads a non-governmental organization working in the community.

“When the price of food rises, this is where it’s felt first.”

In the Philippines the impact of recent increases in the price of food has been profound: 35 million of its 88 million citizens are as poor as the people of Smokey Mountain, surviving on less than $2 per day.

Six months ago, a kilogram of rice in Manila cost just 18 Filipino pesos (about 41 cents).

Today, international rice shortages have driven that price to 34 pesos per kilo (76 cents).

For Escarcha and his wife, Christina, that near doubling in price means even greater hardship and tougher choices.

As rice is the key staple of the Filipino diet, says Christina, no Filipino family can do without it, “and that means having a little less money to buy milk for my children,” she says.

As she speaks, she gently tugs on a string, rocking her 1-year-old son Danny to sleep in a fishnet hammock suspended from the ceiling of their “home” – a back room measuring three metres by two metres. It’s tucked away inside a tiny scrap board house they share with two other families.

In all, 15 people live here in a structure resembling a chicken coop. There are about 1,500 such homes in the neighbourhood. All lack running water, toilets and even glass windows.

But it’s not as though the world wasn’t warned about the onset of the current food crisis and the impact it would have on these poorest of the poor.

ROBERT ZIEGLER, executive director of the Philippines-based International Rice Research Institute (IRRI) warned the world as early as June 9, 2005, in a speech in Ottawa to the Canadian International Development Agency (CIDA).

He had only been director a few months when he decided to air his concerns for the first time before a valued donor.

CIDA contributes about $1.5 million per year to IRRI.

Zeigler told CIDA that supply and demand in rice were growing dangerously out of sync, and it was “pretty clear the handwriting was on the wall.”

“I said I was concerned about the future of rice supplies and what it might mean to political stability,” the IRRI director says, sitting in his offices in Los Banos, about 60 kilometres south of Manila. “People looked at me like I was from another planet.”

In the intervening years, rioting has occurred in the streets of many developing world capitals and one country, Haiti, has seen a government toppled.

“This is not in any way an indictment of the people at CIDA,” Zeigler stresses.

“I mean, everywhere I went people looked at me like I was from another planet.”

Could other governments fall as a result of the current food crisis?

“That’s certainly not something that I’d want to be quoted on,” he says.

What Zeigler is concerned about now, he emphasizes, is ensuring governments don’t “fall into the trap” of thinking that the only serious consequence people should be concerned about is famine.

For those who have young children, a prolonged price increase in food could have serious nutritional consequences, he says, directly affecting a child’s ability to learn.

In Zeigler’s view, a prolonged crisis could impact the future of an entire generation in the developing world.

“It’s not just about famine,” he insists.

BUT HERE in intensely Catholic Philippines, there’s another wrinkle to the story: the population explosion is taxing the government’s ability to respond to the crisis.

“No one seems to want to talk about it,” Zeigler says.

The one exception may be Congressman Salvador “Sonny” Escudero, a two-time agriculture minister. He agrees that there are just too many mouths to feed with too little food and that the time for a family planning and birth control policy is now.

“When I was a kid growing up, Thailand and the Philippines both had populations of 53 million,” the congressman says. “Today Thailand has 62 million people. We have 88 million.”

But because of the influence of the Catholic Church, birth control and family planning remain touchy subjects – and on the street, they are foreign concepts.

In the house Redentor and Christina Escarcha call “home,” where 15 people live, there will soon be 18. Three of the female occupants are pregnant.

Escudero recently met with one of the church’s top bishops, trying to persuade the church to sit down with government and work out a policy, but to no avail.

OUT ON THE MOUNTAIN, many of the children of the population explosion can be seen every day rummaging through the refuse with their parents, desperately trying to earn enough to feed themselves.

Wearing plastic boots, and carrying sacks as big or bigger than they are, they seem – justifiably – bitter boys, growing old in childhood.

Walker, who heads the Philippine Christian Foundation, does her best to lure them into her school in the nearby neighbourhood of Tondo.

Those who do attend class, she says, are like little men, wracked by guilt that they are not working the Mountain with their parents.

“Many are frankly overcome with guilt,” she says.

“They know that when they come to school, where we provide two meals a day, the rest of their family is still working. That’s why many drop out.”

To curb that guilt and stem that tide of dropouts, Walker started awarding canned goods to those with perfect attendance.

For some, it has worked.

“They were able to feel that they too were contributing to the family’s food supply.”

Walker says she has observed children as young as 4 working the Mountain, earning between 50 and 70 cents per day.

They know the complex pricing structure set out by middle men who purchase the goods they collect. Their life depends on it.

Among the most valuable commodities are copper cables. They can bring in 92 cents per kilogram.

Here and there across the Mountain, the scavengers set fire to tires in order to extract their steel cords, setting loose a haze of toxic fumes.

As an emergency stopgap measure, the Philippines’ government has been making subsidized rice available at government warehouses at 18.5 cents per kilogram.

But it costs time and money to get to the warehouses, and people in Smokey Mountain can ill afford either.

“I think the government should do something to lower the price of rice in the shops,” says Escarcha.

His wife Christina doesn’t ask for much.

1 thought on “Philippines: Fighting to survive on mountain of trash”