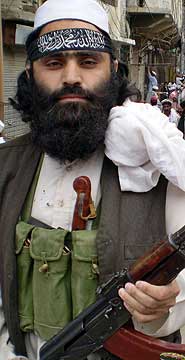 Pakistan’s battle against the Taleban threatened to spiral out of control yesterday after Islamic militants extended their grip in the lawless North West Frontier region.

Emboldened by an increasingly weakened and demoralised security force, Taleban fighters moved in to the outskirts of the provincial capital. Peshawar, surrounding the city and placing it virtually under siege.

Army troops have increased patrols in the garrison areas and paramilitary soldiers carrying machineguns are posted at government buildings. But senior security officials said that militants, who now control the region’s main arterial roads, were in a position to cut off communications at will.

Police on the city’s outskirts have long given up patrolling at night for fear of attacks by militants, who are organised under the banner of Tehrik-e-Taleban, the group led by the notorious commander Baitullah Mehsud. Several officers have been killed in rocket attacks on police posts in recent months. “It is a highly alarming situation,” said a senior provincial government official.

The Taleban raided the main government hospital in the heart of the city last week, kidnapping 16 Christians and taking them to the Khyber Agency tribal region outside Peshawar. Although they were freed after a few hours, the incident heightened fears among non-Muslims.

The Khyber Agency, the supply route for Nato forces in Afghanistan, has emerged as the new centre of Taleban activity. Ambushes on convoys have become more frequent.

Yesterday security forces said that they had found the bodies of 22 men who were captured by militants this week and executed after summary trial. Taleban fighters also abducted and killed six thieves and kidnappers in the Orakzai area near Peshawar.

On Sunday militants kidnapped 15 paramilitary soldiers after raiding a checkpoint in the tribal belt only a few miles from the city. The attack occurred hours after security forces in the area foiled a suicide attack involving a teenager.

Tehrik-e-Taleban has virtually established control not only in the tribal areas, but also in several key cities of the North West Frontier Province.

Mr Mehsud, the Tehrik-e-Taleban leader described by Western intelligence agencies as one of the world’s most dangerous terrorists, has been blamed by Pakistan for masterminding most of the country’s suicide attacks last year.

The commander, accused of orchestrating the assassination of Benazir Bhutto, operates from the South Waziristan tribal region, believed to be a main base for al-Qaeda. Analysts said that government policy had exacerbated instability in the region, blaming a lack of co-ordination among the military and political agencies. “The management of the province is not possible if large pockets of militancy continued to develop,” said a senior government official.

The Taleban has also been emboldened by the Government’s attempts to reach peace deals with them. The authorities have been trying to negotiate a controversial agreement with Mr Mehsud’s fellow tribesmen aimed at containing militants within the region. Last month the provincial government, which is led by the Awami National Party, a Pashtun nationalist group, signed a peace deal with militants in Swat valley – a key battleground for the past 18 months.

Under the agreement, the Government released Maulana Sufi Mohammed, a commander who was in jail for taking thousands of his fighters to Afghanistan to fight US forces.

The Government claimed that the accord would bring peace to the area, but it appears only to have strengthened the militants. On Tuesday soldiers and nine rebels were killed in clashes in Swat, and five schoolgirls were set on fire. Yesterday more than 120 armed men seized control of a primary school in Bela Gud village, about five miles from Mingora, the main town in Swat.

Last year thousands of militants took control of much of Swat, prompting a Pakistani military operation that eventually drove out the insurgents. They are now back, despite the accord.

Yesterday Authorities find the bullet-riddled bodies of 22 pro-government tribesmen slain by militants. More than 100 armed men take control of a government primary school in Bela Gud, five miles from Mingora, the main town of Swat. No students were inside

June 10 Eleven Pakistani soldiers die in US airstrike on a border post at Gora Pai, near the border with the Afghanistan Kunar province, where coalition forces have been fighting the Taleban insurgents

June 7 Five people, including three police officers, are killed by a remote-controlled bomb, planted on a bicycle and detonated in the town of Dera Ismail Khan

June 3 Bomb at a video shop in the town of Kohat, 75km south of Peshawar, kills three and wounds three