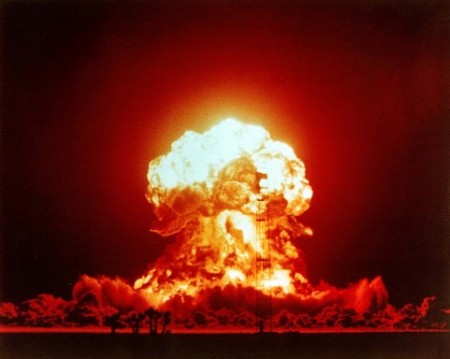 OK, maybe the headline is a little misleading, but let me explain.

You’ve probably seen polls out this week that show Barack Obama opening up a lead in the race for the White House, quite possibly as large as double digits. That could change quickly — Michael Dukakis’ 17-point lead over George H.W. Bush in 1988 is now the stuff of legend — but with gas prices rising toward $5-a-gallon and Americans’ homes now worth less than they were 3 1/2 years ago, the GOP and the White House is well aware that there are big problems looming in November.

Which means only one thing.

We — or at least our closest regional ally, Israel — need to start a war with Iran! Pronto! As in, before January 20, 2009. For all the talk over the last generation of an “October surprise” in an American election, we’ve arguably never had one before. But things could be different this time in around.

I noted here recently that I’ve been avoiding some recent scare stories about planned military attacks on Iran’s incipient nuclear program, for a couple of reasons. For one thing, I believe that while Dick Cheney clearly wants to strike Tehran, there are also now saner people within the Bush administration, including Defense Secretary Robert Gates and many of the top Pentagon brass. And those recent reports have come from sources that have mixed credibility in my mind, Rupert Murdoch’s British papers and the Israeli press.

But this story comes from CBS News, and it’s alarming. There a new factor that’s been tossed into the mix, and has given Israeli leaders and the Cheney faction new life on the issue.

Israel’s message is simple: If you don’t, we will. Israel held a dress rehearsal for a strike earlier this month, but military analysts say Israel can not do it alone.

“Keep in mind that Israel does not have strategic bombers,” Oren said. “The Israeli Air Force is not the American Air Force. Israel can not eliminate Iran’s nuclear program.”

The U.S. with its stealth bombers and cruise missiles has a much greater capability. Vice President Cheney is said to favor a strike, but both Mullen and Defense Secretary Gates are opposed to an attack which could touch off a third war in the region.

Mullen is Joint Chiefs Chairman Admiral Mike Mullen, who left last night to meet with the Israelis. To be sure, Americans — including Obama, of course — and much of the rest of the world don’t want Iran to develop nuclear weapons; the nuclear club already has too many members. In fact, my sense after watching Obama’s recent speech to AIPAC is that his stance on that is tougher than people give him credit for. There are still positive memories of how Israel in a down-and-dirty 1981 airstrike was able to destroy a Saddam Hussein nuclear start-up in Iraq.

But this isn’t 1981. Tehran learned from Baghdad’s mistake — it’s nuclear start-up facilities are a lot better protected, and it would be hard to successfully strike them without significant civilian casualties, especially if, heaven forbid, tactical nuclear bombs were needed to reach them.

In 2008, the United States has 160,000 troops right next door, protecting a Shiite regime that’s been pretty friendly with Iran. How quickly might those troops get caught up in a wider conflict, forcing a spiral of miltary responses on both sides? And although oil prices were high in 1981, the global market was crude wasn’t on the brink like today. What would military action — and a possible shutdown of the Straight of Hormuz, source of 20 percent, at least, of the world’s oil — do the price of a barrel of crude? $250? More? How many thousands of people around the world would die from chaos and unrest, or from worsening food shortages?

In other words, isn’t $8-a-gallon gas an even bigger threat to global security than Iranian nukes — which probably aren’t even as close as Israeli leaders claim they are? To trigger World War III just because you’re a little nervous about a change in the American White House would be even an greater folly of mankind than World War I, if that’s possible. I know that are some people out there working to block an Obama presidency, and there are ways to do that in a democracy.

Setting the Persian Gulf ablaze isn’t one of them.

3 thoughts on “Why “President Obama” will cause World War III”