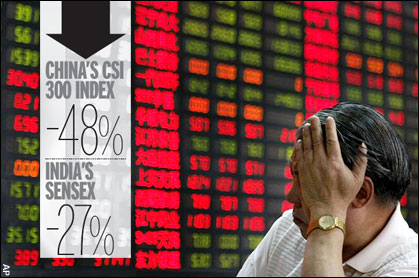 Downward spiral: Chinese stocks have slumped by almost 50pc since October while Mumbai’s BSE index has lost 27pc of its value

Central banks across much of Asia, Latin America, and Eastern Europe will soon have to jam on the breaks or risk a serious crisis as inflation spirals into the danger zone. As the stark reality becomes ever clearer, this year’s correction in emerging market bourses and bond markets has now accelerted into a full-fledged rout.

Shanghai’s composite index touched a fourteen-month low of 2,900 yesterday. It follows moves this week by the central bank raised reserve requirement yet again, draining a further $60bn from the banking system. Chinese stocks have now slumped by almost 50pc since peaking in October.

In India, Mumbai’s BSE index has lost 27pc of its value as the exodus of foreign funds accelerates. The central bank has raised rates to 8pc to curb inflation and halt a run on the rupee, but critics still say the country waited too long to tackle overheating. The current account deficit has shot up to near 3.5pc of GDP. A plethora of subsidies has pushed the budget deficit to 9pc of GDP.

Russia, Brazil, India, Vietnam, South Africa, Indonesia, Nigeria, and Chile – among others – have all had to raise interest rates or tighten monetary policy in recent days. Most are still behind the curve.

“The inflation genie is out of the bottle: easy money is the culprit,” said Joachim Fels, chief economist at Morgan Stanley.

“Weighted global interest rates are 4.3pc, while global inflation is above 5pc. The real policy rate in the world is negative,” he said
advertisement

The currencies of Korea, Thailand, the Philippines, and Malaysia have come under pressure this week as investors scramble for dollars in moves that echo the East Asia crisis in 1997-1998. Several countries have had to intervene to slow the currency slide.

The sudden shift in sentiment appears to follow comments by Ben Bernanke and Tim Geithner, the heads of the US Federal Reserve and the New York Fed, leaving no doubt that Washington has lost patience with the crumbling dollar.

It is almost unprecedented for Fed officials to take a public stand on the Greenback. The orchestrated move is clearly aimed at halting the vicious circle in the oil markets, where crude prices are feeding off dollar weakness – with multiples of leverage.

The “strong dollar” campaign has switched into high gear. US Treasury Secretary Hank Paulson has conducted an aggressive lobbying drive behind the scenes in the Middle East and Asia. America’s friends and foes have been left in no doubt that the enormous strategic might of the United States is now firmly behind the currency. From now on, they cross Washington at their peril.

The markets are now pricing in two rate rises by the Fed this year. Investors no longer doubt that the US – and Europe – will do what is needed to restore credibility. This display of resolve has suddenly switched the focus to the very different universe of emerging markets, where a host of countries have repeated the errors of the 1970s.

Richard Cookson, a strategist at HSBC, advises clients to slash their holdings in these regions.

“Inflation looks like a very real problem in Asia, and the risk is that investors will lose faith in the region’s currencies. Although markets have fallen savagely from their peaks, they’re still looking pricey. We’ re lopping exposure even further, to zero,” he said.

“Where to put the money? We think corporate debt is stunningly cheap compared with equities. Seven-year to ten-year ‘BBB’ [rated] corporate bonds in the US haven’t been this cheap since the Autumn of 2002,” he said.

“Until and unless policy makers in the emerging world – especially those in China – tighten policy dramatically, the inflation rates are unlikely to fall much. Our guess is that most don’t have much will to tighten pre-emptively,” he said.

Russia’s inflation is 15.1pc, yet interest rates are 10.75pc. Vietnam’s inflation is 25pc; rates are 12pc. Fitch Ratings has put the country on negative watch and warns of brewing trouble in the Ukraine, Kazakhstan, the Balkans, and the Baltic states. The long-held assumption that emerging markets are strong enough to shrug off US troubles is now facing a serious test. The World Bank has slashed its global growth forecast to 2.7pc this year. The IMF and the World Bank define growth below 3pc a “global recession”.

There is a dawning realization that China is facing a major storm as inflation (7.7pc), the rising yuan (up 5pc this year), soaring oil prices, and an economic downturn in the key export markets of North America and Europe all combine to crush profit margins. China uses five times as much energy as the US to produce a unit of GDP. It is acutely vulnerable to the energy crisis.

A quarter of the 800 shoe factories in the Guangdong region have shut down in recent months, and several thousand textile workshops are battling to stay afloat. Hong Kong’s industry federation has warned that 10,000 firms operating in the South of China may soon go out of business.