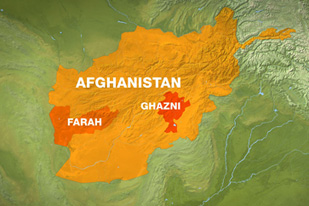 Taliban fighters have captured a remote district in central Afghanistan, taking prisoner the police and administration chiefs, officials and the Taliban have said.

The fighters attacked the district of Rashidan in the central province of Ghazni in a night attack, the provincial governor and a Taliban spokesman told the AFP news agency on Friday.

Mujahed said the plight of the seized officials was unknown.

Zabihullah Mujahed, a spokesman for the Taliban, confirmed the fighters were in control and said the district chief, acting police chief and eight policemen had been taken prisoner.

“They are alive and we have captured them. The district is totally under our control,” he said.

Rashidan is a small district about 120km southwest of Kabul.

Teresa Bo, reporting for Al Jazeera in Afghanistan, said Ghazni – located along a major highway from Kabul, the capital, to the south – is one of the most complicated areas where fighting between Afghan, US and Taliban forces takes place almost everyday.

She said the Taliban hold power in strategic locations, adding: “Some of the police officers working here say they are afraid they will be the next target.

“Security is one of the major concerns for every one in the area; the soldiers know they can be attacked any minute.”

Bo said a vicious cricle of violence continues as the Taliban fight for the control of the country and the US-led coaliton struggles between re-construction and war.

The Taliban, in government between 1996 and 2001, last year overran several districts in remote parts of Afghanistan, but in most cases were ejected by government troops and soldiers attached to Nato’s International Security Assistance Force (Isaf) and a separate US-led military coalition are fighting Taliban militants.

Taliban officials say they control a handful of districts, mostly in the south of the country.

Nato military force officials said in December that the Taliban held not more than five districts.