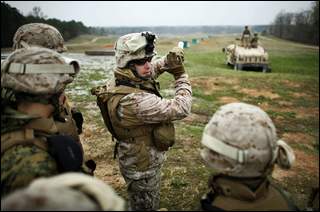 U.S. Marine helicopters will land at the old Eastgate Consumer Mall, Brookside Park and other Indianapolis locations when the city becomes a mock battlefield next week.

About 2,300 Marines from the 26th Marine Expeditionary Unit, based at Camp Lejeune, N.C., will conduct urban warfare training from Wednesday through June 19 in and around Indianapolis.

Most of the troops will be deployed at the Indiana State Fairgrounds and the Raytheon facility on Holt Road, said Debbi Fletcher of the Indianapolis/Marion County Emergency Management Agency.

“We don’t want anyone thinking that there’s an invasion happening or that we declared martial law or something like that,” Fletcher said.

The Marines have been cleared by state, federal and local authorities, Fletcher said. The unit’s commander promised to try to keep noise to a minimum and give neighbors plenty of warning.

“Our aim in Indianapolis is to expose our Marines to realistic scenarios and stresses posed by operating in an actual urban community, thereby increasing their proficiency in built-up areas,” Col. Mark J. Desens, commander of the 26th MEU, said in a statement. “While some of the activity will take place around Camp Atterbury, residents in many areas can expect to see helicopters flying overhead, military vehicles on the roads and Marines patrolling on foot,” Desens said.

The Marines will practice firing weapons, conducting patrols, running vehicle checkpoints, reacting to ambushes and employing nonlethal weapons, according to a statement.

However, not all cities are so open to the training. In February, after first canceling scheduled training, Toledo (Ohio) Mayor Carty Finkbeiner invited the Marines to train in the city, but outside the downtown area.