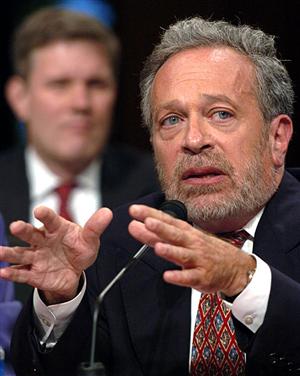 NEWSWEEK’s Arlyn Tobias Gajilan talked to Reich about the Fed’s surprise rate cut Wednesday, the “D word,” the growing criticism of Federal Reserve chairman Ben Bernanke and whether a stimulus package will include $500 check for each American. Excerpts:

NEWSWEEK: Many investors had hoped for an interest-rate cut, but this cut’s size and timing took people by surprise. Were you taken aback by the Fed’s three-quarter basis-point cut, the largest single-day reduction in the Fed’s history? And do you think it’s necessary?
Robert Reich: Yes and yes. The Fed is clearly becoming aware of the serious potential of an economic meltdown. The size of the cut is larger than anyone expected because the Fed usually moves in [increments of] .25 or .50 percentage points. But the danger of a cut this size is that it may panic the investors. They may conclude that the Fed has determined that the economy is even worse than assumed and that there is still a way to go before we hit bottom. Yet the Fed has to [cut]. Credit markets are still uncomfortably frozen, and the housing slump continues to worsen.

Unlike Ben Bernanke , Alan Greenspan had a habit of hinting at what his next move would be. While he kept investors on their toes, Greenspan rarely acted as unexpectedly as Bernanke did this week. Is it dangerous for a Fed chairman to surprise the market?
Yes, but I don’t believe Bernanke wants to surprise the market as a general rule. This strikes me as a major exception to the relative transparency he’s trying to achieve with regard to letting the market know where the Fed is going. It’s a move that underscores the seriousness of the current economic problems.

Tuesday’s rate cut initially caused a huge market swing, with the Dow, NASDAQ and the S&P 500 all hitting 14-, 15- and 16-month lows respectively. But by the end of the day, all three had bounced back considerably. Does that mean the cut is working?
The fact is that no one knows anything. Investors are flying blind. Even experienced Wall Street hands have no idea whether we’re near the bottom. We can expect even more violent swings in the stock market. The reason for all the uncertainty is that the big banks and lenders simply have no idea how many bad loans they’re holding. [During the housing bubble] credit markets evolved such complex ways of reselling and repackaging debt that even many top Wall Street professionals simply have no idea of the risks and costs they’re involved with. The bottom line is there is a great deal of uncertainty out there, and the markets hate uncertainty.

Can we expect another rate cut at the Fed meeting next week?
Yes. I wouldn’t be surprised if the Fed cut another quarter point. If it doesn’t announce something at its meeting, it may cut .25 or even .50 within the next month or so. They are clearly worried. [And while lowering rates may cause] inflation, it is far less threatening now than a recession or perhaps–and I cringe at using the word–a depression. You cringe, but you still used the D word. How far along are we on that particularly slippery slope?
Hopefully, not far. But several managing directors on the Street, whose opinions I trust, have said to me that the chances for a depression are 20 percent. That matches my sense. In other words, it’s still low, but 20 percent is nonetheless far higher a probability than anyone should be comfortable with. Even absent a depression, it seems likely that the coming recession will be deeper than the last several.

There’s a U.S. News & World Report blog item that was making the rounds on the NYSE floor Wednesday reporting that Bernanke has privately been much more negative about the economy than he publicly admits. From the indicators you’ve been watching, how bad do you think things are really going to get in the next six months to a year? Is a recession avoidable at this point?
It’s going to be difficult to avoid a recession, defined as two consecutive quarters of economic contraction. Difficult because the scale of the problems is so much larger than any stimulus package or Fed rate cut can readily deal with. The stimulus package now being considered on the Hill is in the range of $140 [billion] to $150 billion. But at the rate housing prices are dropping, consumer purchases are likely to be hit by $360 [billion] to $400 billion. Similarly the Fed rate cuts, under normal circumstances, would free up money, but lenders are afraid of lending because they don’t know how much risk of default they face, even at lower interest rates. It’s a little like offering a lobster dinner to someone who is so constipated that they can’t take in another mouthful.

Bernanke hasn’t won many fans lately. Under his leadership, many on the Street think the Fed has moved too slowly to avoid recession and too ineffectively to prevent inflation. Is that fair criticism?
Probably not. Up until last week, Wall Street’s assessment of Bernanke was quite positive. He was getting good press all around. He faces a very difficult balancing act under circumstances in which energy and food prices are rising, the dollar is falling and inflation is becoming more threatening. What should the Fed do? It is terribly unqualified to cope with speculative bubbles and their aftereffects. The housing bubble and the Wild West credit markets of the last few years came about not because the Fed kept interest rates too low, but because the treasury, the comptroller of the currency, and the Fed, in its regulatory capacity, failed miserably to use their authority to oversee credit markets and assure that they were not unduly exploiting those low interest rates with irresponsible lending practices. Now we have a mess on our hands. Bernanke has the only pooper-scooper in town, but it is too small for the job.

There’s a theory that the global markets have matured past the point where they won’t necessarily get slammed whenever the U.S. economy gets hammered. Do you buy into that thinking? Will our country’s worsening economic situation infect the rest of the world economy?
The U.S. is not completely uncoupled from the rest of the global economy, but the good news is that consumers in Japan, China, India and Europe are now far better able to fill-in the gap when American consumers fail to do the job they have been doing for decades, which is to buy enough of the world’s goods and services to keep the world out of recession. Remember American consumers have been the Energizer Bunnies of the global economy for some time. Now others around the world are wealthy enough to become Energizer Bunnies themselves.

The administration has called for a $140 billion economic stimulus package. There have been few details about the plan, but Treasury Secretary Henry Paulson and Congress have all hinted that taxpayers might soon receive checks of several hundred dollars or more. Can Americans expect those checks any time soon and will such a plan actually stimulate the economy?
Only relatively low-income people are likely to spend any extra money they get, since they need the extra money in order to maintain their living standards. So the first questions is will the stimulus be targeted to them or will it be frittered away in tax breaks for the upper-middle class and for investors. Secondly, the money has to be in people’s pockets right away, not eight or nine months from now in the form of a tax rebate from the IRS. The only surefire way to do that is to reduce withholding in payroll taxes, since 80 percent of Americans pay more in payroll tax than they do in income tax. Thirdly, the money has to be enough to change people’s behavior. Five hundred dollars isn’t likely to do the trick. I see far more politics in this than economics. Washington has to look like it’s doing something, and so it will.