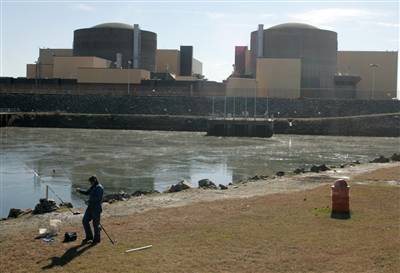 An Associated Press analysis of the nation’s 104 nuclear reactors found that 24 are in areas experiencing the most severe levels of drought. All but two are built on the shores of lakes and rivers and rely on submerged intake pipes to draw billions of gallons of water for use in cooling and condensing steam after it has turned the plants’ turbines.

Because of the yearlong dry spell gripping the region, the water levels on those lakes and rivers are getting close to the minimums set by the Nuclear Regulatory Commission. Over the next several months, the water could drop below the intake pipes altogether. Or the shallow water could become too hot under the sun to use as coolant.

“If water levels get to a certain point, we’ll have to power it down or go off line,” said Robert Yanity, a spokesman for South Carolina Electric & Gas Co., which operates the Summer nuclear plant outside Columbia, S.C.

Limits on intake pipes
Extending or lowering the intake pipes is not as simple at it sounds and wouldn’t necessarily solve the problem. The pipes are usually made of concrete, can be up to 18 feet in diameter and can extend up to a mile. Modifications to the pipes and pump systems, and their required backups, can cost millions and take several months. If the changes are extensive, they require an NRC review that itself can take months or longer.

Even if a quick extension were possible, the pipes can only go so low. It they are put too close to the bottom of a drought-shrunken lake or river, they can suck up sediment, fish and other debris that could clog the system.

An estimated 3 million customers of the four commercial utilities with reactors in the drought zone get their power from nuclear energy. Also, the quasi-governmental Tennessee Valley Authority, which sells electricity to 8.7 million people in seven states through a network of distributors, generates 30 percent of its power at nuclear plants.

While rain and some snow fell recently, water levels across the region are still well below normal. Most of the severely affected area would need more than a foot of rain in the next three months – an unusually large amount – to ease the drought and relieve pressure on the nuclear plants. And the long-term forecast calls for more dry weather.

Lakes nearing their minimums
At Progress Energy Inc., which operates four reactors in the drought zone, officials warned in November that the drought could force it to shut down its Harris reactor near Raleigh, according to documents obtained by the AP. The water in Harris Lake stands at 218.5 feet – just 3½ feet above the limit set in the plant’s license.

Lake Norman near Charlotte is down to 93.7 feet – less than a foot above the minimum needed for a backup system at Duke Energy Corp.’s McGuire nuclear plant. The lake was at 98.2 feet just a year ago.

“We don’t know what’s going to happen in the future. We know we haven’t gotten enough rain, so we can’t rule anything out,” said Duke spokeswoman Rita Sipe. “But based on what we know now, we don’t believe we’ll have to shut down the plants.”

During Europe’s brutal 2006 heat wave, French, Spanish and German utilities were forced to shut down some of their nuclear plants and reduce power at others because of low water levels – some for as much as a week.

If a prolonged shutdown like that were to happen in the Southeast, utilities in the region might have to buy electricity on the wholesale market, and the high costs could be passed on to customers.

“Currently, nuclear power costs between $5 to $7 to produce a megawatt hour,” said Daniele Seitz, an energy analyst with New York-based Dahlman Rose & Co. “It would cost 10 times that amount that if you had to buy replacement power – especially during the summer.”

At a nuclear plant, water is also used to cool the reactor core and to create the steam that drives the electricity-generating turbines. But those are comparatively small amounts of water, circulating in what are known as closed systems – that is, the water is constantly reused. Water for those two purposes is not threatened by the drought.

Instead, the drought could choke off the billions of gallons of water that pass through the region’s reactors every day to cool used steam. Water sucked from lakes and rivers passes through pipes, which act as a condenser, turning the steam back into water. The outside water never comes into direct contact with the steam or any nuclear material.

At some plants – those with tall, Three Mile Island-style cooling towers – a lot of the water travels up the tower and is lost to evaporation. At other plants, almost all of the water is returned to the lake or river, though significantly hotter because of the heat absorbed from the steam.

Nuclear plants are subject to restrictions on the temperature of the discharged coolant, because hot water can kill fish or plants or otherwise disrupt the environment. Those restrictions, coupled with the drought, led to the one-day shutdown Aug. 16 of a TVA reactor at Browns Ferry in Alabama.

The water was low on the Tennessee River and had become warmer than usual under the hot sun. By the time it had been pumped through the Browns Ferry plant, it had become hotter still – too hot to release back into the river, according to the TVA. So the utility shut down a reactor.

David Lochbaum, nuclear project safety director for the Union of Concerned Scientists, warned that nuclear plants are not designed to take the wear and tear of repeatedly stopping and restarting.

“Nuclear plants are best when they flatline – when they stay up and running or shut down for long periods to refuel,” Lochbaum said. “It wears out piping, valves, motors.”

Both the industry and NRC spokesman Scott Burnell said plants can shut down and restart without problems.