The high street downturn today claimed its biggest casualty with Woolworths’ 27,000 shopworkers told they face redundancy in the new year.

Talks with potential white knights continue but administrators Deloitte have told staff they should be prepare themselves for the worst.

‘Some people have been with the company for 10, 20 years and it really means something to them as individuals,’ said one head office worker. Woolworths has been around for 99 years so it is almost a heritage brand.’

Workers learned of the closure plans in an email from head office this morning.

A first tranche of 200 stores will close on 27 December followed by further outlets on 30 December and 2 January. The final stores will open their doors to the public for the last time on 5 January, bringing down the curtain on nearly a century’s trading.

Rescue talks continue with a number of parties interested in buying parts of the loss-making business. Interest is said to come from groups in the UK, Asia, Africa and the Americas but hopes of a deal being stuck look increasingly forlorn. 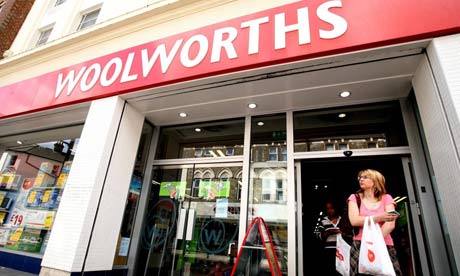 Woolworths has always prided itself on its cheap deals. Photograph: Stephen Kelly / PA

For 30,000 Woolworths staff it may be a bleak Christmas as it became clear yesterday that the veteran high-street retailer could go under this week if management cannot clinch a fire sale.

Woolworths evokes nostalgia for precious pocket money spent on bottles of cola and ill-advised chart singles by Bucks Fizz. Last week it became clear that Woolworths itself was worth only pocket money, with management in talks to sell the 800-store chain for £1.

The collapse of Woolworths would be by far the largest retail failure this year, symbolising the high street’s woes.

Read moreWoolworths: everything must go