It does that by “cloud-seeding,” the colloquial term for rocket-launching chemicals into clouds, accelerating the creation of ice crystals that eventually become rain (China uses military aircraft too). This meteorological enema isn’t just handy for combating the country’s increasingly severe droughts and, supposedly, preventing hail. Local governments use “weather modification” to clear away lingering billows of air pollution. 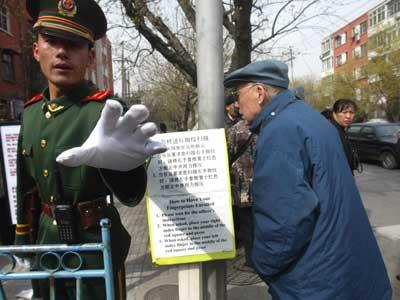 Severe drought in Southwestern China is driving up food prices and heightening concerns about the availability of drinking water.

Huang Weijuan, a Guangzhou housewife, said she spent 55 yuan ($8) to buy a bag of rice in Taojin agricultural bazaar in the city’s Yuexiu district over the weekend.

“But the price for the same bag of rice, which weighs 20 kg, was about 50 yuan a month ago,” Huang said.

And the price of courgette, a vegetable which mainly grows in Yunnan province, is now selling at 5 yuan per kg in the bazaar, up 0.5 yuan from last month, Huang said.

“The price of many foods and vegetables have gone up in the past month and I worry that prices will keep increasing,” she said.

The government is rushing to help in order to alleviate the potential for social tension. In some of the hardest hit provinces, the government has been forced to provide emergency supplies of drinking water to 18 million people. They’ve also resorted to creating artificial rain through cloud-seeding. Over 3,200 artillery pieces bombarded the sky with chemicals across 77 counties, forcing moderate rain to fall.

“It was the first rain I have seen since last October, but it only lasted for about three hours from 3 am to 6 am this morning,” Bu Lupiao, a farmer of Bapiao village in Jinghong county, Xishuangbanna Dai autonomous prefecture.

Since October… That’s one heck of a drought. Yet the farmer above was lucky. In Chuxiong Yi prefecture, over 100 cloud seeding guns failed to create rain. Cloud seeding isn’t a long-term solution, thus the natural rain better come soon else there could be more pressure on living standards in drought-hit regions.

Those chemicals are toxic. 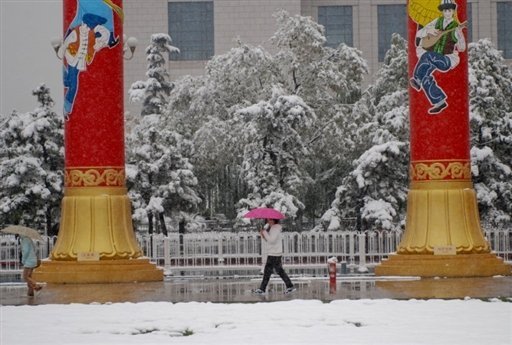 Pedestrians make their way across the snow in Tian’anmen Square

BEIJING — Chinese meteorologists covered Beijing in snow Sunday after seeding clouds to bring winter weather to the capital in an effort to combat a lingering drought, state media reported.

The unusually early snow blanketed the capital from Sunday morning and kept falling for half the day, helped by temperatures as low as minus 2 Celsius (29 Fahrenheit) and strong winds from the north, Xinhua news agency reported.

Besides falling in the northeastern provinces of Liaoning and Jilin and the northern province of Hebei, the eastern port city of Tianjin also got its first snow of the autumn, the report said.

“We wont miss any opportunity of artificial precipitation since Beijing is suffering from the lingering drought,” the report quoted Zhang Qiang, head of the Beijing Weather Modification Office, as saying.

Chinese meteorologists have for years sought to make rain by injecting special chemicals into clouds.

India is developing new techniques to create rain artificially amid growing fears over the late arrival of the monsoon season. 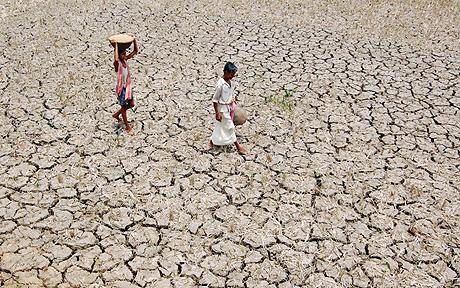 A delay in the arrival of this year’s monsoon has left India’s paddy fields parched and caused water-shortages throughout the main cities Photo: AFP/GETTY

Scientists at its Institute of Tropical Meteorology disclosed a new series of “cloud seeding” experiments as fears of a drought grip a country praying for the heavens to open.

A delay in the arrival of this year’s monsoon has left India’s paddy fields parched and caused water-shortages throughout the main cities. A heatwave has claimed at least 24 lives, with the absence of the rain’s cooling effect on 45 degree C temperatures has caused power-cuts, while school summer holidays have been extended by a week in the hope of a downpour.

India’s agriculture, stock markets and the fortunes of its political parties traditionally depend on good monsoon rains. In one state, Andhra Pradesh, which has had only half the expected rainfall this month, farmers fear their crop yields could fall by 30 per cent.

The Indian government has used American cloud seeding technology in the past but is now developing its own techniques to guarantee monsoon clouds break into torrential rains.

“A pack of cement used in creating … good weather in the capital region … failed to pulverize completely at high altitude and fell on the roof of a house, making a hole about 80-100 cm (2.5-3 ft),” police in Naro-Fominsk told agency RIA-Novosti.

Ahead of major public holidays the Russian Air Force often dispatches up to 12 cargo planes carrying loads of silver iodide, liquid nitrogen and cement powder to seed clouds above Moscow and empty the skies of moisture.

A spokesman for the Russian Air Force refused to comment.

June 12 was Russia Day, a patriotic holiday celebrating the country’s independence after the break-up of the Soviet Union.

Weather specialists said the cement’s failure to turn to powder was the first hiccup in 20 years.

The homeowner was not injured, but refused an offer of 50,000 roubles ($2,100) from the air force, saying she would sue for damages and compensation for moral suffering, Interfax said.