Maybe she wasn’t joking after all… 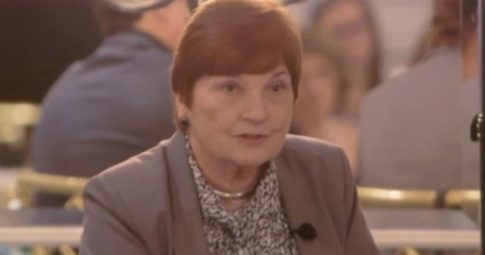 – Professor: “We’ll Just Get Rid of All the Whites in the United States”:

An infectious diseases expert ‘joked’ that a good way to eliminate vaccine refusniks, who overwhelming tend to be white people, is to simply “get rid of all the whites in the United States”.

The comments were made by Carol J Baker, M.D. at a May 2016 event in Atlanta, Georgia but are only just beginning to receive attention.

Baker, who is a Pediatrics-Infectious Disease Professor at the Baylor College of Medicine in Houston, Texas, told a National Meningitis Association panel discussion that a “solution” to the large numbers of white people who refuse to let their children be given vaccines is to “get rid” of white people.

Professor: “We’ll Just Get Rid of All the Whites in the United States” – https://t.co/uewWMLfLtW pic.twitter.com/89l84O5vtC

“We’re talking about the minority [of vaccine refusers], and strategies against the minority,” said Baker. “So I have the solution: Every study published in the last five years, you look at vaccine refusers, I’m not talking about people we can talk them into coming to terms, but refusers. Let’s just get rid of all the whites in the United States, because Houston is the most diverse city in the entire United States.”

Baker went on to note how she as a white person was “in the [racial] minority for more than 20 years in the city of Houston,” adding that immigrants are superior because they take their vaccines.

“Guess who wants to get vaccinated the most in Houston? Immigrants!” said Baker before going on to assert that there should be a “war” that is “fought one on one, with individual families” to make their children take vaccines.

We can only assume that Baker was making a crass joke (few seemed to find it funny). The fact that she is an infectious disease expert makes the joke even more ghastly.

Imagine a situation where people in the black community were refusing to undergo a certain treatment or medical procedure. Would anyone ‘joke’ that a good solution would be to “get rid” of all the black people?

This is yet another example of how casual anti-white racism has been allowed to become mainstream by dominant leftist cultural institutions.

The kind of rhetoric spewed by Baker only encourages actual white supremacists and just leads to more racial division.

“With the eggs and vaccines, there is another problem:

“AUTISM is caused by vaccines, that are cultivated in human cells, in brains of aborted children. The human brain tissue cannot be completelly filtered out, and those, who are unlucky and get a human tissue with the vaccination, quickly teach their immune system, that human brain is disease and immune system successfully and quickly fights it down and out, which is cause no.1 of today’s mostly-american autism… (In Europe, where 27 national health-watch agencies are harder to corrupt than single american EPA or which one is it, there are not used these vaccines cultivated in aborted human brains, and autism is much lower.)

Most other vaccines cause allergies, partly also because of bad cultivation substance. (Allergy is error of immune system, vaccination is programming of immune system, and not seeing the connection is strange and suspicious… After all, those same corporations will life-long sell you remedies to ease you with your allergies, so it is their win – the more sick you are while not dying, the better for pharma bussiness…)

So while eggs are harmless but sometimes do not work, they are probably the only safe method to cultivate vaccines – and fear those vaccines, that have been cultivated in human tissues…!
(Maybe someone is intentionally spawning the egg-hoax as a reason of malfunctional flu vax, just to push cultivation in human tissues and real threat…)

It’s always time to remember, that jews, who make vaccines, intent to get rid of all white people, openly thus…
https://www.infowars.com/professor-well-just-get-rid-of-all-the-whites-in-the-united-states/
The worst on this whore’s rant is, that she is in a position to fulfill that.””