– “This Is A Dangerous Iranian Escalation”: Bahrain Blames Pipeline Explosion On Iran, Terrorists:

There was something odd about Friday’s night’s explosion of an oil pipeline belonging to Bahrain’s state-run oil company BAPCO, which local authorities initially said was the result of an accident: as we said, the giant fireball had all the hallmarks of either sabotage or a terrorist event, the only question is whether it was real or staged, and who would ultimately be blamed for it.

#BREAKING : Huge #fire resulted in a gas pipeline explosion in #Bahrain while ago. (exact cause yet to be confirmed) pic.twitter.com/kAgQ1nJARa

We didn’t have long to wait for the answer: on Saturday Bahrain government claimed the blast was a “terorrist act” directed by Iran.

In a statement on Twitter, the Bahrain Ministry of Interior said that “evidence gathered by the inspection team confirms that this was an intentional act undertaken by terrorists intending to undermine the security of the Kingdom” with Bahrain’s interior minister, Sheikh Rashid bin Abdullah Al Khalifa, adding that the blast was “the latest example of a terrorist act performed by terrorists in direct contact with & under instruction from, Iran.“

PT: Evidence gathered by the inspection team confirms that this was an intentional act undertaken by terrorists intending to undermine the security of the Kingdom

PT: HE Minister stressed this is latest example of a terrorist act performed by terrorists in direct contact with & under instruction from, Iran. Reaffirmed MOI’s utmost priority is the safety & security of all citizens, & MOI will spare no effort to maintain public safety

Bahrain’s Foreign Minister Khalid bin Ahmed Al Khalifa later tweeted that the explosion had targeted a pipeline running between the island nation and neighboring Saudi Arabia, which provides financial and security support to the kingdom.

“This is a dangerous Iranian escalation aimed at terrorizing citizens and damaging the world’s oil industry,” the minister tweeted.

In a carefully orchestrated escalation, one largely staged for public consumption purposes, also on Saturday Saudi Arabia said it was suspending pumping oil to Bahrain following the pipeline blast. The Saudi energy minister also said it had increased security precautions at all facilities following the Bahrain blast. Which, for the cynics out there, means a “pipeline explosion” in Saudi Arabia, one which will also be blamed on Iran-guided terrorists, is likely imminent.

While Iran had no immediate comment Saturday, it has long denied being behind Bahrain’s militant groups.

The explosion damaged cars and nearby buildings, forcing firefighters to evacuate those close to the flames in Buri, just outside of the capital, Manama. Authorities later extinguished the blaze on the pipeline belonging to the state-run Bahrain Petroleum Co. While no one was injured in the explosion late Friday night near the Shiite village of Buri and no militant group immediately claimed the blast, Bahrain’s reaction which was the latest to scapegoat Iran for the plethora of problems to hit the Gulf region, opened a new front in the low-level insurgency plaguing Bahrain since its 2011 Arab Spring protests.

Bahrain, which is a critical Gulf nation to regional US strategic interests as it is home to the U.S. Navy’s 5th Fleet, faces occasional attacks from local Shiite militant groups as the kingdom ruled by the Sunni Al Khalifa family continues a crackdown on all dissent, imprisoning or forcing politicians and activists into exile. Independent news gathering there has grown more difficult, with the government refusing to accredit two AP reporters and others .

However, as AP notes, that previous campaign of bombings and shootings had not seen the island’s oil infrastructure targeted, even immediately after Emirati and Saudi forces helped Bahrain put down its 2011 Arab Spring protests. As such Friday’s pipeline attack could be a sign of a far more dangerous escalation – whether real or “false flagged” – one which seeks to scapegoat Iran.

Unlike its oil export powerhouse neighbors, Bahrain produced only 64,000 barrels of crude oil a day in 2016, far lower than the other oil-producing nations of the Persian Gulf, according to the EIA. Additionally, due to ongoing budget difficulties, Bahrain’s foreign currency reserves had plunged to levels not seen in over a decade. 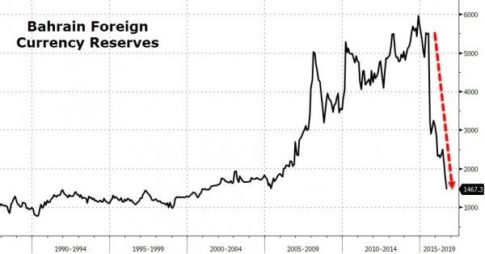 Bahrain has faced increasing financial pressure in recent years: the IMF estimates that Bahrain needs oil prices at $99 a barrel to balance its budget this year, compared with $73.1 a barrel for Saudi Arabia, which is overhauling its economy. While Brent crude is trading at the highest level in more than two years, it’s still almost $40 below Bahrain’s breakeven price.

Things took a turn for the worse last week, when we observed the plunge in the Bahrain Dinar forward market… 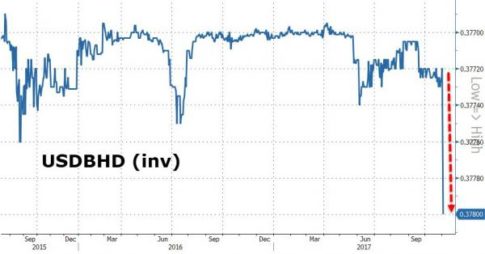 … following a Bloomberg report that Bahrain had requested a bailout from Saudi Arabia and the UAE.  And judging by the surge in reserves immediately after… 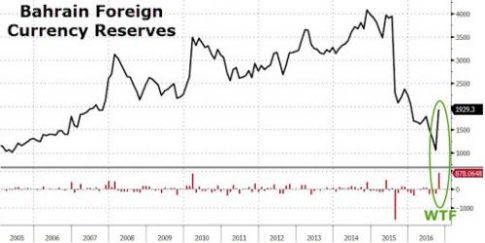 … Bahrain may have received it.

“Most people are fully expecting the other Gulf countries to come to Bahrain’s aid,” said Jason Tuvey, a London-based economist at Capital Economics. “If Bahrain was forced to devalue its currency it would probably start to raise questions about other currency pegs.”

True, but Saudi Arabia – which itself is facing a dire financial situation – would not have given Bahrain billions with no strings attached. And as may be the case, one of the conditions appears to have been to blame any “imminent terrorist attacks” on Iran. That’s precisely what happened overnight. As to whether this will be the tipping point that launches what now appears to be inevitable war between Iran/Lebanon and Saudi Arabia and the Gulf Cooperation Council – in addition to Israel – we’ll just have to wait and see…

“All part of the charade.”